Hans-Jürgen von Arnim received the Knights Cross for his leadership of the 17. Panzer-Division during the first week of Operation Barbarossa. In that time his Division had blazed a trail of destruction as part of Guderians Panzergruppe, and among other things it:

Arnim himself was wounded at Stolpce on the 28.06.1941, however he would later be awarded the Knights Cross while in hospital for the commendable achievements of his Division. 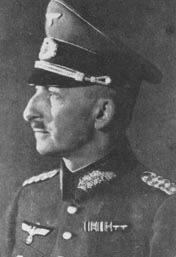