No.617 Squadron is commonly known for its actions during the Dambusters raid (Operation Chastise), for which it was specially formed. But after this famous raid it was kept in existence for the remainder of the war as a precision-bombing unit. In this role 617 Squadron carried out various other missions. One of them was the bombardment of the Saumur Tunnel in occupied France during the night of 8-9 June 1944. The raid was prepared in great haste because the Allied commanders believed the Germans would use the tunnel to move a Panzer unit to the Normandy battlefield. The tunnel was successfully bombed and the attack is regarded as a notable contribution to the success of the Normandy invasion.

Isolation of the Normandy battlefield

In April 1944 Bomber Command had been ordered to co-operate in the preparations for Operation Overlord and was put under command of the Supreme Headquarters Allied Expeditionary Force (SHAEF). Its main task was to bomb German transport lines in an attempt to isolate the battlefield, thus depriving the Germans of the opportunity to send reinforcements to the landing beaches. This campaign is known as the Transportation Plan. But even with this programme of transport bombing, the allies assumed that the Germans would be able to move troops and armour to Normandy within a few days. One of the units to be sent to Normandy as reinforcements was the 17. SS-Panzergrenadier-Division "Götz von Berlichingen", which was based in the Poitiers area, in the south-west of France. The Division boasted six infantry battalions  four of them fully motorized  and 42 Sturmgeschütz IV assault guns. A series of sabotage actions by the French resistance had already been planned to delay the units movement.

After the D-Day landings on June 6th, Bomber Command kept operating in support of the land forces and attacking German positions and rail and road communications. The 17. SS-Panzergrenadier-Division had begun leaving the Poitiers area on 7 June. French Resistance attacks had already started and held the division up. It was believed the unit would be transported to the battlefield by train. To reach Normandy, the division was expected to use a railway tunnel at Saumur, a town 125 miles from the coast. This was a double track tunnel, locally known as the Tunnel de Nantilly. The tunnel was straight and 1030 meters (1000 yards) long. Under great urgency a plan of attack was devised for Bomber Command to destroy the tunnel and therefore further delay the SS-Divisions movement. No.617 Squadron was ordered to bomb the tunnel. To improve the chance of success it was decided to use the Tallboy-bomb for the first time.

The Tallboy was a 12,000 pound bomb developed by the British engineer Barnes Wallis. Wallis had worked three years on a bomb which was effective against hardened structures. It was designed to drive deep into the earth before exploding. The Tallboy had a very strong casing to prevent the bomb from breaking apart on impact. It also had an aerodynamic design so that when dropped from great heights it would reach a very high speed and could pierce nearly five meters (5,5 yards) of concrete. A detonation delay could be set so the bomb could pierce the target before exploding. The Tallboy could pierce targets, but could also create an earthquake effect to cause structural damage to the target. Tallboys could only be carried by specially adapted Lancaster bombers because of its weight and required altitude.

During the night of 8/9 June Bomber Command dispatched more than 500 aircraft against railway targets in France to prevent German reinforcements from the south reaching Normandy. 483 aircraft - 286 Lancasters, 169 Halifaxes and 28 Mosquitoes  attacked railways at Alençon, Fougères, Mayenne, Pontaubault and Rennes. 29 Lancasters and 3 Mosquitoes were detailed for the attack on the Saumur railway tunnel. Their aim was to seal the entrance to the tunnel at the south-west end and to hit the railway bridge over the river Loire at the north-east entrance of the tunnel. 4 Lancasters of No.83 Squadron would fly to the target and illuminate it with flares, enabling the 3 Mosquitoes to mark the target. The leading Mosquito was piloted by Wing Commander Leonard Cheshire, the famous 617 Squadron commander and master bomber for this raid. The other two machines were flown by Squadron Leader David Shannon and Flight Lieutenant Gerry Fawke. After marking the target, 18 Lancasters would drop their Tallboys over the south-west entrance of the tunnel (Aiming Point A). Seven more Lancasters, of which one carried another Tallboy and the others 1,000 pound bombs, would aim for the railway bridge at the north-west entrance to the tunnel (Aiming Point B).

Cheshire and his navigator, Pilot Officer Kelly, took off from RAF Woodhall Spa at 23:23 hours in the night of 8-9 June. The two other Mosquitoes followed, but Shannon had to abort his mission because of an over speeding port engine. Cheshire and Fawke continued and on arrival over the target descended to 500ft to drop their markers. The four Lancasters who had to illuminate the target with their flares had encountered lack of response from their H2S radar equipment. Most of their flares had gone wide and werent useful for the Mosquitoes. However, Cheshire and Fawke managed to drop their markers accurately. Fawkes navigator, Flying Officer Bennett later recalled that the flares could not have been positioned better than if they had "been wheeled there in a barrow!" Cheshire gave the order to commence bombing at 02:08 hours. The Lancasters dropped their Tallboys and good results were reported. Flight Lieutenant Astbury: "Most of the bombs were dropping around them [the target markers]. One direct hit was seen on the tunnel itself. Bombing was well concentrated around the spotflares." Flying Officer Daniel recalled: "All bombs seen to fall in a 50 yards radius. One direct hit on the marker itself." Flying Officer Duck reported: "Bombing good and very concentrated around markers which seemed to be on the target." Various other crews reported accurate and concentrated bombing, although some had difficulty in estimating the effects because of the smoke. Some of the marking flares had been extinguished by the explosions as well. The two Mosquitoes had observed the attack and Flight Lieutenant Fawke described it as excellent. He and Cheshire landed at Woodhall Spa at 04:30 and by 05:30 all 25 Lancasters were back as well.

It was expected that only 60% of the bombs would fall in the target area. This because the crews lacked practice in using Tallboys due to other commitments. A reconnaissance flight was carried out the following day to take damage-assessment photographs. Eighteen craters were counted within 200 meters from the tunnel mouth. Locals reported that these craters were 15 meters deep and had a width of 35-40 meters. Some Tallboys had driven into the ground and created an earthquake effect, bringing down massive amounts of rock and dirt from the mountainside to cover the tracks. The railway was severely damaged by the bombing. One Tallboy had hit the roof of the tunnel and slammed through it. The explosion that followed caused the tunnel to collapse. Direct hits from 1,000 pound bombs had been made on the bridge near the north-west tunnel entrance destroying it. However, not all bombs hit the target. Several houses were destroyed, as well as a transformer building, which deprived the area of electricity. Two civilians were killed and a further three injured.

The railway line was cut and the tunnel blocked. The Germans ordered the inhabitants of Saumur to clear the debris, working night and day for nearly three weeks. American bombers were despatched to attack the bridge on 22 and 24 June. The tunnel was cleared and the Germans had started repair works before the area was liberated in August 1944. However, before they left the Germans destroyed the repairs by exploding a charge. The line was not brought into full use until four years after the end of the war.

The movement of the 17. SS-Panzergrenadier-Division to Normandy was badly delayed. Five trains full of troops and equipment were held up. They had to proceed to Normandy by road and arrived in groups. It is difficult to express the effect of the bombing in numbers, also because the French resistance also played an important role in delaying the 17. SS-Panzergrenadier-Division with their attacks and sabotage actions. But the arrival of German reinforcements was severely delayed and therefore the attack on the Saumur Tunnel can be regarded as a notable contribution to the success of the allied invasion of Normandy.

Bomber Command
RAF unit which controlled strategic and sometimes tactical bombing (as in Normandy)
D-Day
The day of the long awaited invasion of western Europe in Normandy, France, 6 June 1944. After a long campaign of deception the allies attacked the coast of Normandy on five beaches to begin their march on Nazi Germany. Often explained as Decision Day, though this is entirely correct. The D stands for Day as generally used in military language. In this case it means an operation beginning on day D at hour H. Hence Jour J in French.
Division
Military unit, usually consisting of one upto four regiments and usually making up a corps. In theory a division consists of 10,000 to 20,000 men.
H2S
Groundscanning radar on board of a bomber.
infantry
Foot soldiers of a given army.
invasion
Armed incursion.
master bomber
Specialized plane leading the marking of the territory which could transmit corrections in order to increase the accuracy of the bombing to hit the target as close as possible
radar
English abbreviation meaning: Radio Detection And Ranging. System to detect the presence, distance, speed and direction of an object, such as ships and airplanes, using electromagnetic waves.
RAF
Royal Air Force. British air force
raid
Fast military raid in enemy territory
resistance
Resistance against the enemy. Often also with armed resources.
SHAEF
Supreme Headquarters Allied Expeditionary Force, the Allied High Command in Western-Europe after the Normandy landings.
Squadron
A military unit in the Belgian navy usually six to eight small ships operating together under one command. The smallest military unit in the Dutch air force of about 350 men. In most countries is the designation of a military unit thesize of a company. It is either an independent unit, such as a battery, or part of a bigger Calvary unit. In the air force it is the designation of a unit of aircrafts.
track
The track of a tank. 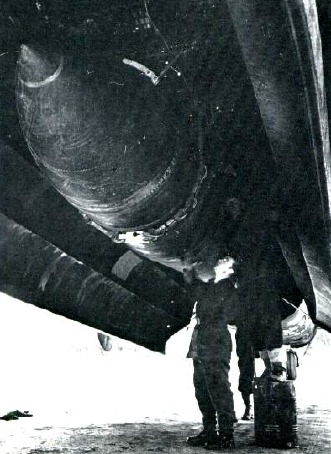 A tallboy in position in a specially modified Lancaster's bomb bay. 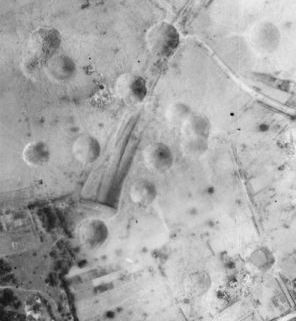 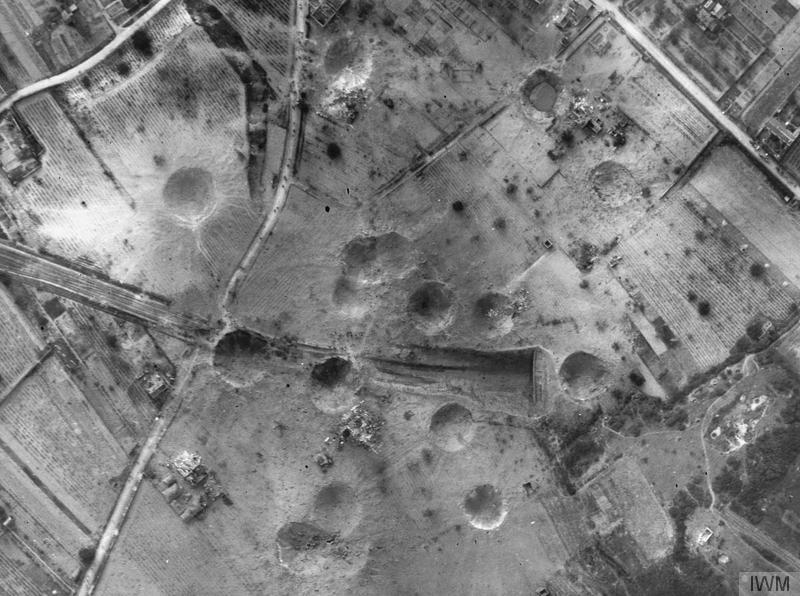 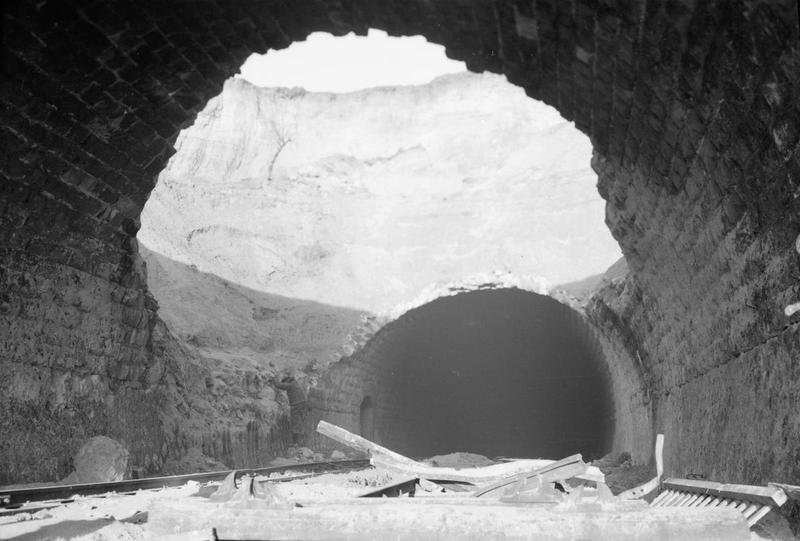 The gap in the tunnel roof caused by a direct hit from a Tallboy. Source: Imperial War Museum. 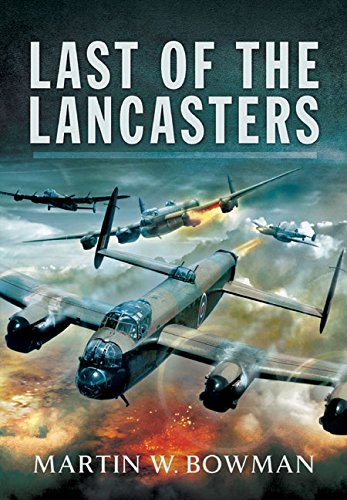