One of STIWOT's objectives is to present history in a most neutral way possible. To be able to do this, insight into both sides of the battle is necessary. This has made us decide to place a potentially historically charged biography like this. STIWOT does not approve the political beliefs / choices of the person in question and will never do so. 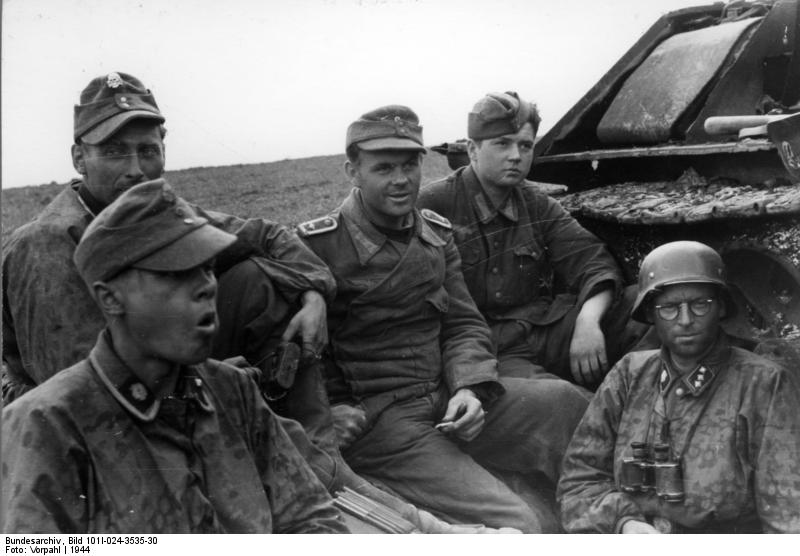 Now for some memories of Paul Krauss

It was 16 September 1941 and I became 28 years old that day. I was then Untersturmführer (Lieutenant) and was in charge of a platoon in the 6. Komp Inf Regiment SS Totenkopfdivisie. Since our Comp. Chef H. Stuf. Bunsen died a day before, I had to lead the company further. The combat strength of this comp. consisted of only 65 men.

I was lucky enough to survive this war after several serious injuries. However, a special happening still remained with me, because this episode, in this all-destructive war, was very humane.

We had formed a hedgehog position on a small hill and since this day had run out without fighting, we wrapped ourselves in the canvas and blankets to be well rested. The first snow fell that night and it was cold. A beautiful birthday, I thought in the morning, when I knocked the snow off my frozen canvas. We had it extremely cold on this night. It would have been time to equip our troops with proper winter clothing. Hadn't the army command learned from the Napoleon campaign to Russia?

This night passed quietly, so I could report to the Battalion: Quiet night, no losses, combat strength 65 men. We were positioned in front of the town of Borok, a town we had to conquer as the 6th company. This place was indeed on the map, but in reality it did not exist, that is to say, at least not anymore! The violence of the war had degraded the town into ruins; on the assumption that people had once lived there. But further across the plains, behind Borok, was a piece of forest that was occupied by the enemy that we had to pass through to reach our actual destination in the town of Kirrilowchtschina. We knew that this part of the forest was occupied by the Russians, but what we did not know, when we attacked, was that our enemy consisted of a female unit, who defended themselves in a brave, tough and fanatic way.

Only when the last soldiers of this unit fled and we began to gather their wounded who were scattered here and there, did we notice that we were dealing with women. As a rule, the Russians took their dead and wounded with them, at least, as far along as that was possible. But here, we immediately found a complete dressing station with injured people who could not walk. The overall leadership rests with a female doctor in the rank of captain. There were also two ambulances with a green crescent on it (The Russians were not affiliated with the Red Cross). Those who could not flee were collected by us and carried to their dressing station. I felt a chest tightness, once it was confirmed that this was all about the involvement of women. Nonetheless, we respected these women who had not behaved worse than their male colleagues. I also respected the female doctor who had been able to flee but stayed with her wounded. These brave women were also considered warriors fated to death and imprisonment and were loyal to their homeland, which was praised by the Germans.

What now, I thought to myself, here a situation had arisen that cannot be found in a soldier's textbook. I subsequently did something that I should never have done, according to my training as a soldier. I gestured to the Russian that she had to load the seriously injured women into the two ambulances with the help of the slightly injured until both cars were full. I then pointed in the direction of the Russian frontlines that were certainly not far away and said: "Dawai, dawai na Domoi!" Domoi means house; in English meaning; move on and head home, or disappear and go home! I have not forgotten the joy in the woman's face and her radiant black eyes with the small Mongolian wrinkles. She sent the ambulances away and after she also had taken care of our injured soldiers, went with some other women in German captivity. A few weeks later I would see her again.

Not only is the bravery of these women noteworthy, but also the fact that their regime sent them to the frontline to fight as men, and had to experience and endure very unpleasant things such as lice. This demonstrates that in a communist society each is equal and is treated as such. During the final years of heavy fighting, women were also hired in Germany, due to a lack of men. Nonetheless never armed, but rather as nurses, assistants on the planes and also as telegraphist; thus never as soldiers.

To occupy a kilometre long battle line with eleven men

A few weeks later, it was the end of October and meanwhile we were left with only eleven soldiers, because of further fighting. We built a hedgehog defence on a hill and had to defend a battle line of a kilometre in length! All this had to happen at a temperature of a few degrees below zero, without winter clothing and hardly anything to eat. The Spiess (Hauptfeldwebel, the mother of the company) informed me that the provisioning of supplies could not be counted in the coming days, as logistics could not handle the impassable roads. I responded to him, slaughter those few Russian horses. We must get something to eat. No sooner said than done, we now had meatballs for a few days as a meal.

With the few of us, including me as a company commander, we kept watch, for only half an hour. We were positioned in a former bunker that we had conquered from them. My field telephone rang on 10/29/41. The Battalion called, a voice said: "Listen, don't hang up!" Then we heard a voice: "This is the Soldiers' Radio Belgrade, you will now be hearing a special broadcast intended for the frontline soldiers." Subsequently the most famous song of Lilly Marleen was broadcasted: "Vor der Kaserne, vor dem grossen Tor steht eine Lateme, und steht sie noch davor", sung by Lale Anderson. This song touched us very much; it deeply touched our hearts. When we heard this text with music, being far away from home, unwashed, unshaven, hungry and full of lice, tears just came to our eyes, including me. Someone said that brings hope, the war cannot last long! A small mistake! Then came the voice of the Battalion commander: Tomorrow morning a V.B. will be visiting you, explain the situation to him (V.B. is a so-called; forward artillery observer).

30-10-41 The V.B. has arrived and I will explain him the situation. Since the distance from us to the Russian line was only 50 to 70 meters, one could clearly see what was going on there. I showed the VB a place where quite a lot of Russians were located and a viewpoint where he would be able to observe everything, whilst being kept covered. On the way back to our bunker I heard a Russian mortar shoot, 5 times a pop, I didn't hear the sixth pop anymore because it struck in my immediate vicinity, directly in front of our bunker. I was thrown into the bushes by the blast and just saw our Spiess approaching me, who brought me into the bunker. Later it turned out that I was full of splinters from head to toe. I immediately tried deep breathing, fortunately no blood came out of my lungs, so luckily they were not punctured. I could still de-register from the battalion commander by telephone, who first asked if I really was not able to move on. I said no, my head is hanging sideways. Later I noticed the other injuries. My Spiess then dragged me to the dressing room, where I was given a temporary bandage, then on to the main dressing room, etc., until the field hospital (Feldlazarett) in the city of Demjansk (located halfway between Leningrad and Moscow).

I want to spare myself narrating the story of the route to the field hospital. Every soldier who has been wounded knows the ordeal one must endure; stumbling over uneven Russian roads was terrible.

During the transport, some comrades died along the way. They were unloaded and temporarily left behind in a shed, where I also was placed. I was unconscious (due to blood loss) and apparently they thought I was dead. When I regained my senses, I saw trouser legs with wide red stripes. I thought, oh, that is the war god who comes to count his loot of that day. Idiotic of course, but suddenly I saw a figure, although unclear, short black hair and deep black eyes; isnt that the Russian female doctor!? I patted the floor with my hand and she leaned over and touched me. I could tell, but slipped into unconsciousness again. Thats just the way it goes, one is left behind by the caretakers to die. Almost frozen and bled to death, this Russian finds me and was taken to the hospital in Demjansk. She operated me there as well and I thank her for enabling me to move my head normally again. However, I only heard everything later from the male nurse who further took care of me. The neck surgery had been very difficult, he said when I had to learn to swallow again with difficulty.

Until spring I was interned in this field hospital located inside Demjansk Pocket and surrounded by the Russians!

After the liberation from the encirclement ("Kessel"), I would be moved to Königsberg, but I asked to be taken to the hospital in Coburg, as my wife was staying there with her parents; this was allowed.

Of course after being discharged from the hospital a so called K.V. inspection followed, i.e. 'Kriegsverwendungsfähig'; suitable for the war or not. It didn't work out, my condition, according to the doctor, wasn't such that I could go back to the frontline. However, I volunteered again and had to sign a declaration after a medical examination that I wanted to return voluntarily. The feeling that I would leave my comrades there and that they would have to do everything on their own made me decide to do the above.

Division
Military unit, usually consisting of one upto four regiments and usually making up a corps. In theory a division consists of 10,000 to 20,000 men.
front
Largest Soviet ground formation. It was attached to a certain area which gave its name to the units involved. For instance the Voronezh front.
mortar
Canon that is able to fire its grenades, in a very curved trajectory at short range.
Regiment
Part of a division. A division divided into a number of regiments. In the army traditionally the name of the major organised unit of one type of weapon.