Raid on the Population Registry of Amsterdam

The population register and identity cards were an important means of control for the German occupier. Gradually, opposition to this system developed. Forgeries of these documents were booming. Another possibility for resistance was the elimination of the population registers. On Saturday night, 27 March 1943, a resistance group which had developed around the visual artist Willem Arondéus carried out a raid on the office of the population register of Amsterdam. The effect however was less than had been hoped. In addition, 12 people were executed by the occupying force for their complicity in the attack. 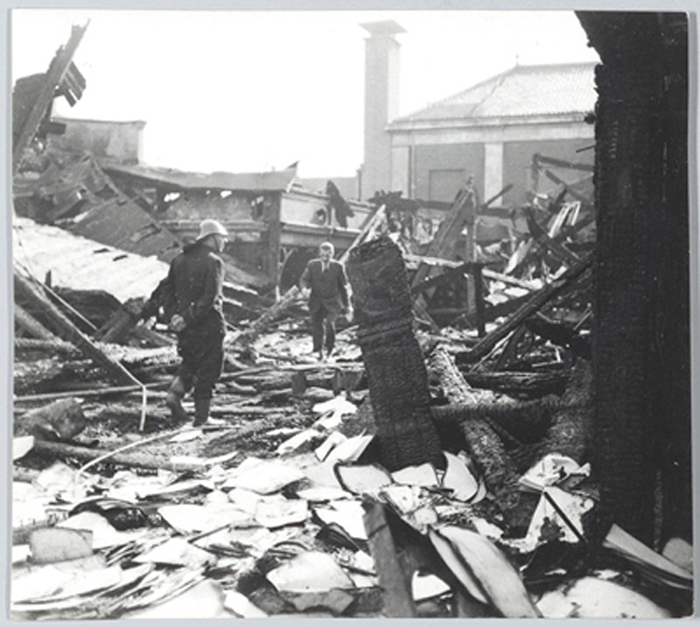 The burned out attic of the Population Registry after the attack. Source: Amsterdam City Archives

The Population Registry was located at Plantage Kerklaan 36-38 during the Second World War. Before the war this building was the concert hall belonging to the adjacent Artis Zoo. Among other things, the Amsterdam Population Registry contained data on more than 70,000 Amsterdam Jews. But the data in the population register could also be used for the identification of labourers for the German war industry and of members of the resistance. It was therefore an extremely useful control and investigation tool for the occupying force.

To sabotage the effectiveness of this tool, documents were forged by resistance groups. The need for counterfeit identity cards increased. The identity cards of Jews were stamped with a "J", which made their identification easier. Members of the resistance who were registered in criminal records of the Security Police [Sicherheitspolizei] also needed false identity cards. In July 1942, resistance fighter Gerrit Jan van der Veen and Willem Arondéus, among others, founded the Identity Card Centre [Persoonsbewijzencentrale PBC)]. This resistance organization printed around 80,000 counterfeit identity cards until the end of the war. The Falsification Centre (FC), set up in Nijmegen in 1942, also played a major role in counterfeit work. This Falsification Center would later merge into the National Organization for Help to People in Hiding [Landelijke Organisatie voor Hulp aan Onderduikers (LO)].

The forging of identity cards was one way to sabotage the means of control. Another option was the elimination of the population registers themselves. Archives and collections of documents were in this way destroyed or seized by various resistance groups. However, these were relatively small-scale actions, the results of which were often only minor.

Planning and execution of the raid

The resistance group around Willem Arondéus, who was mainly occupied with aiding people in hiding, decided that a raid should be carried out on the Amsterdam Population Registry. This had to be planned and executed with great care as it was agreed that there should not be any casualties. A plan was devised. The perpetrators would enter the premises dressed as police officers. The Registry employees would be transferred to another location, before explosives would be ignited. These had been stolen in 1940 by members of the resistance group from a magazine in the Naarden Fortress. The fire that would ensue should destroy the documents. To allow the fire to do its work, some men from the fire brigade who were sympathetic towards the resistance movement were informed about the planned raid.

On Saturday evening, 27 March 1943, nine members of the resistance group went to the Plantage Kerklaan location. Six of them were dressed in police uniforms; the other three wore civilian clothing. Willem Arondéus was in charge and wore a uniform with the rank of police captain. The guard at the entrance was told that the building was to be searched for suspicious persons. Once inside Willem Arondéus called in the entire guard. They were disarmed, and each was given an sedative injection. Under cover of darkness, they were laid down at the Artis Zoo. Back at the Registry, as quickly as possible, filing cabinets were opened, documents turned upside down and topped with benzene. Explosive charges were also applied.Around eleven o'clock came the sound of loud blasts. As a result of the explosions, the building caught fire. When the fire brigade was informed, they deliberately waited before responding to allow the fire to spread. Large quantities of water were subsequently used for extinguishing the flames and afterwards, so that water damage was caused in addition to the fire.

When the fire was out, the effect of the attack turned out to be smaller than expected. Only 15% of the documents were destroyed by the fire. A good many identity cards were packed tightly together in filing cabinets and thus remained undamaged as a result. In addition, a few thousand documents had become unusable due to water damage. Nevertheless, the devastation was enormous. 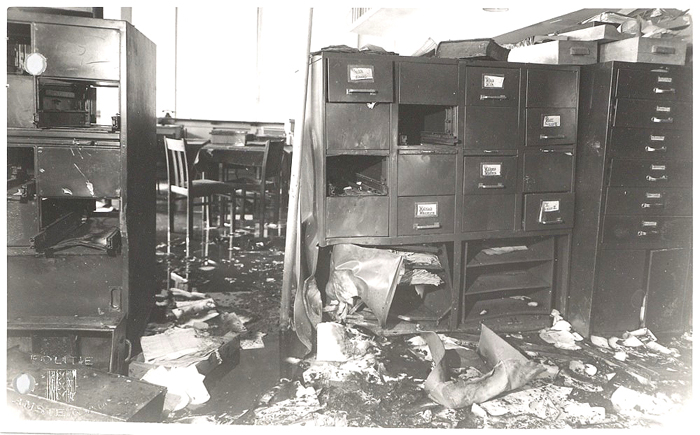 Damaged chests of drawers for individual record cards inside the building after the attack. Source: Amsterdam City Archive

The Sicherheitsdienst tried to trace the perpetrators of the attack and offered a reward for information that could solve the case. An NSB (Dutch Nazi party) member Pieter Teunissen heard some names uttered by a loose-tongued colleague at work and reported this to the Sicherheitsdienst. Teunissens colleague was questioned and mentioned the name of a friend of Arondéus, Joop Hoogsteder, who knew who were involved in the attack. He was arrested on April 1. During the interrogations, Hoogsteder broke. As a result, 21 people were arrested by the Sicherheitsdienst within a short time. Only Gerrit Jan van der Veen and Willem Sandberg managed to stay out of the hands of the Germans. Teunissen received 6500 guilders for his cooperation in the investigation.

On 1 July 1943, the SS- und Polizeigericht (Court of Justice of the SS and police) announced that 12 persons were sentenced to death for their involvement in the attack. The verdict was executed the same day in the dunes near Overveen. Willem Arondéus (48), Rudi Bloemgarten (23), Karl Gröger (25), Coos Hartogh (26), Sam van Musschenbroek (27), Guus Reitsma (20), Henri Halberstadt (32), Johan Brouwer (45), Koen Limperg (34), Sjoerd Bakker (28), Cornelis Barentsen (50) and Cornelis Roos (29) were shot. Three people (Cornelis Honig, William Beck and Johanna Scholten) received a penitentiary sentence. Gerrit Jan van der Veen managed to stay out of the hands of the Germans then, but would not survive the war. He was shot on 10 June 1944 after being arrested for committing a raid on the Huis van bewaring (prison) in Amsterdam. Willem Sandberg survived the war. He later designed the plaque in memory of the attack on the Population Registry. This was placed in 1946 beside the door of Plantage Kerklaan 36. 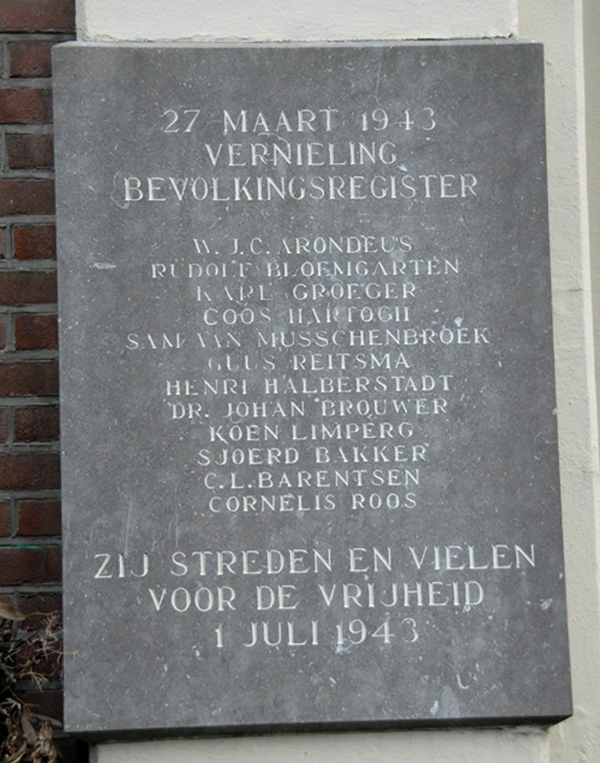 Today the building is known as Studio Plantage, from which TV-programs such as De Wereld draait door, Pauw & Witteman, and Holland Sport are broadcast.

brigade
Consisted mostly of two or more regiments. Could operate independently or as part of a division. Sometimes they were part of a corps instead of a division. In theory a brigade consisted of 5,000 to 7,000 men.
Jews
Middle Eastern people with own religion that lived in Palestine. They distinguished themselves by their strong monotheism and the strict observance of the Law and tradition. During World War 2 the Jewish people were ruthlessly persecuted and annihilated by the German Nazis. . An estimated 6,000,000 Jews were exterminated.
Nazi
Abbreviation of a national socialist.
NSB
National Socialist Movement. Dutch political party sympathising with the Nazis.
raid
Fast military raid in enemy territory
resistance
Resistance against the enemy. Often also with armed resources.

Translated by:
Cor Korpel
Article by:
Pieter Schlebaum
Published on:
01-09-2019
Feedback?
Send it! 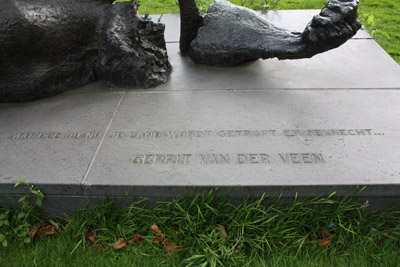 Memorial for the Artists Resistance

Memorial for the Artists Resistance