Officially known as the de "Odznaka honorowa dla Oficerów (Równorzêdnych) i Szeregowych za Rany i Kontuzje" (Award in honor of Officers and other ranks having been wounded) was instituted July 14th, 1920 by the National Defence Council (Rady Obrony Pañstwa). The medal could be awarded to anyone, regardless of rank, who had been wounded while defending the fatherland against an enemy.
In order of importance, it became second to the Ode Virtuti Militari (Orderze Virtuti Militari, Military Order of Honor), and before the Cross of Honor (Krzy¿ Walecznych).
The award consisted of a blue ribbon, 0.6" to 0.7" in heigth and 1.6" to 2.7" in width, with two narrow horizontal bands. For each injury, a pentagonal silver star was attached to the ribbon; up to three stars could be worn on the ribbon. For each additional injury, a star was attached to a new ribbon to be worn above the first. For multiple injuries, sustained during the same action, only one star was awarded. The ribbon was to be worn above the left breast pocket, directly above the ribbons or medals of other previously awarded decorations.
For the "Polish Armed Forces in the West" (Polskie Si³y Zbrojne na Zachodzie), it was decided to also award this decoration during World War Two. The way it was to be worn was altered in such a way that in the event of more than three stars were awarded, they were attached to one, wider ribbon.
The Polish 1st, and 2nd, Armies, fighting along the Soviet forces, also wore the award, just like the Polish Army of resistance in Poland proper.
After World War Two, the decoration faded away without being formally abolished or prohibited. By decree of August 9th, 2011 and confirmed March 15th, 2012 a new version was instituted, maintaining the ribbon and the stars, however the colors were changed to dark blue with two crimson bands, the same colors as the Order of the Military Cross (Orderu Krzy¿a Wojskowego). 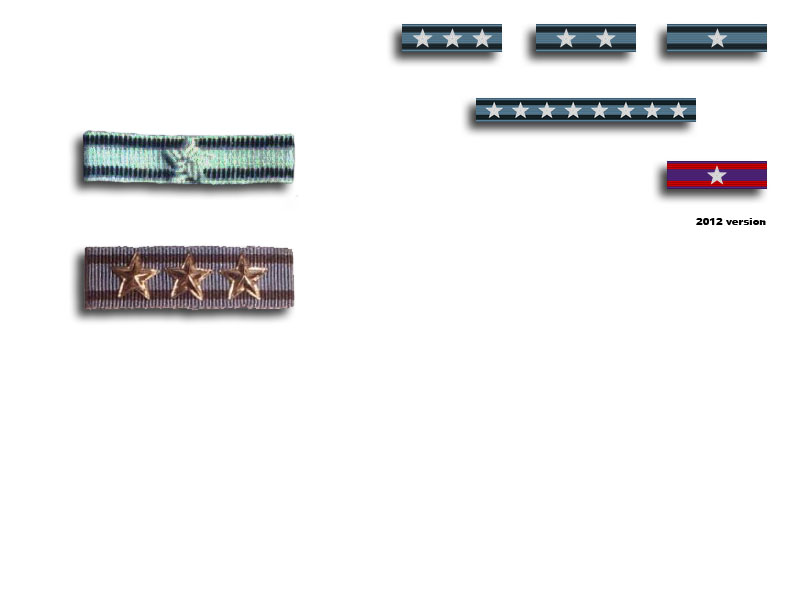