The Dannebrogordenen, was instituted 1219 by King Valdemar II, after the Battle of Reval and was renewed and again instituted on October 12th 1671 by King Christian V.
According the statutes, insituted on December 1st 1693, only 50 knights could be bestowed in the Order. By Royal Decree on July 28th 1808, by King Frederick IV, the Order was expanded "to recognize meritorious citizenry for all subjects, regardless of position or nobility". The order was expanded from one class to four: Grand Commander, Grand Cross Knight, Commander and Knight.
By Royal Decree on October 10th 1951 was decided that women could also be allowed to receive the Order.

Today, the Order has four public grades, with the third and fourth grade devided into two classes. The Silver Honor Cross is not formally a part of the grades. 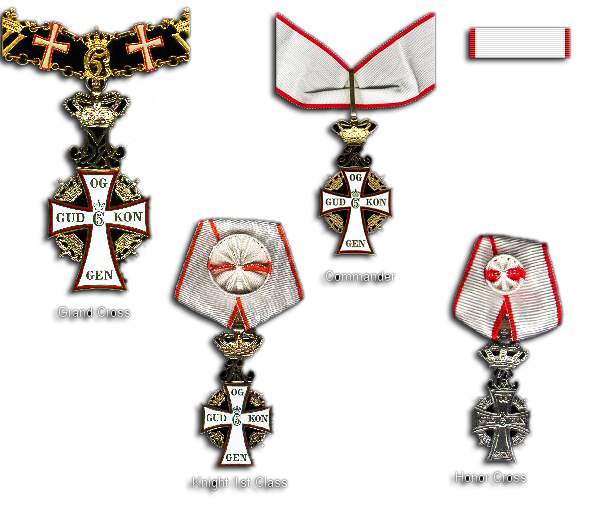 Ridder af 1. grad af DannebrogOfficer to the Order of the Dannebrog
In the database: 5
Issued:unknown

Ridder af DannebrogKnight to the Order of the Dannebrog
In the database: 8
Issued:unknown