During WWII Erich Axthammer flew a total of 530 sorties as an assault pilot, a total which included 305 with the Hs 123. In this time he achieved 4 aerial victories and also destroyed a number of tanks. His final wartime rank was Oberfeldwebel . After the war he served with the Bundeswehr from October 1958 until 31st March 1973 and in this capacity he finally reached the rank of Stabsfeldwebel.

Feldwebel Axthammer is an outstanding ground attack pilot who has demonstrated great courage and devotion to duty over the course of 505 sorties against the Soviet Union. His aptitude for aerial combat and dutifulness place him far above the average for other pilots.

Feldwebel Axthammer began operations on the Eastern front starting on the 01.04.1943. Within the space of 11 months he flew 305 sorties with the Hs 123. Throughout the retreat battles in southern Russia he did an exemplary job of leading ground-attack operations in support of the Heer. Starting in May 1944, following his familiarization training with the Fw 190, Feldwebel Axthammer flew an additional 200 sorties against the enemy. During this time period he once again served as an example of courage for his comrades.

Feldwebel Axthammer has achieved great successes since being awarded the German Cross in Gold (which he was given after flying about 250 sorties). More specifically, in this time period he has destroyed 42 trucks, 46 horse-drawn wagons, 2 tanks, 1 armoured car, 2 artillery pieces, 2 anti-aircraft guns, 5 anti-tank gun positions, 2 trucks with limbered artillery pieces, 2 fuel dumps and 2 pontoon bridges. He achieved direct bomb hits on 6 ammunition dumps and a pier. 27 trucks were so effectively shot up that they are believed to be destroyed. Furthermore, in this same time frame he has also shot down 4 aircraft, effectively shot up 3 others and set afire 2 on the ground. All of these kills had witnesses, however they have not been accepted as official by the OKL.

All of these successes by Feldwebel Axthammer were only possible due to his extraordinary skill, personal bravery and ruthless dedication to the conduct of combat.

Thus, on the grounds of his successes and worthy battlefield conduct, I believe Feldwebel Axthammer to be worthy of being awarded the Knights Cross to the Iron Cross. 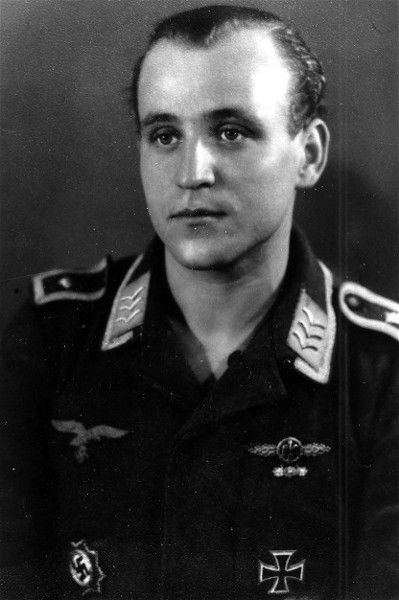