On the 15.07.1944 the SS-Grenadier-Regiment 32 (lett.Nr.3) found itself in a defensive posture along the Welikaja river under the leadership of its commander, Waffen-Obersturmbannführer Aperats. During the afternoon of this day it received orders to withdraw to the west. The Russians had broken through on the Divisions northern wing and threatened to push the German forces further south into a partisan-infested wood, one which additional strong Russian elements had already reached after thrusting through a gap in the frontline of the south neighbouring division. The Regiment had orders to pull back northwards via WaskowaIwachnowa and then through StulowoGawrowaBeloussowa before retreating behind the Ssinjaja river and finally reaching Kriwino. However by now this force only consisted of the remnants of the I. and III./G.R. 32 (with about 260 men), stragglers from the SS-G.R. 33 (with about 70 men), the 1./SS-Pi.Btl. 15 (with 100 men), the 13./G.R. 32 (with 2 infantry guns and 5 shells) and 1 Zug from the 14./G.R. 33 without its Pak guns. Altogether, a force of about 550 heads.

The Regiment first disengaged from the frontline as ordered before marching towards Lake Ssotno. Along the way it encountered strong partisan resistance (about 400 men) but managed to fight its way through it.

Eventually the boundary of the available maps was reached, and no maps for the area beyond were available. The result was that the Regiment made a wrong turn, marching south instead of west. It marched right into the swampy and partisan-infested wood. It marched along the route ArapySalogiLipinaAkssenowoBalkinoMaschury before crossing a fast flowing river, wherein some men swam and others used hastily assembled rafts. Eventually the Regiment succeeded in reaching Koshenes on the Issa with all of its wounded soldiers, and here it encountered a straggler group (about 200 men under the command of an Oberleutnant) from Grenadier-Regiment 159 of the 69. Infanterie-Division. This group subordinated itself to Waffen-Obersturmbannführer Aperats. The Kampfgruppe was thus expanded to about 750 heads strong.

During the continued march to the west the dispatched combat reconnaissance made contact with the enemy at Peski. Waffen-Obersturmbannführer Aperats attacked this enemy without hesitation. Personally charging in the foremost line, he stormed the village with his Kampfgruppe. It transpired that this had been held by a Russian battalion.

150 dead Russians soon covered the battlefield, and the remainder fled. The spoils of war consisted of:

Prisoner statements revealed that the Kampfgruppe had encountered the rearward elements of a Russian division. This division had already crossed the Mosuli river with tanks and Katyusha rocket launchers and was marching northwards, presumably towards the 15. Waffen-Grenadier-Division der SS.

Totally alone, Waffen-Obersturmbannführer Aperats was now faced with a difficult decision. Should he take the clearly easier way to the west in the hopes of reestablishing contact with friendly lines? Or should he strike into the rear of the northward marching Russian forces that were evidently attacking his own Division? Despite being aware of the associated risks with the latter choice, he decided to take up the more combative option in order to stay true to his original mission of reaching Kriwino and establishing contact with his Division.

First, all those captured weapons that could not be packed by the available men were destroyed. Then, while taking along all the wounded and vehicles, the Kampfgruppe set out in the direction of Mosuli. It managed to reach the Ssinjaja bridge to the north of Mosuli without enemy contact, but thereafter the Kampfgruppes lead elements came under fire from the forest edges to the north of the bridge. Immediately after this the Kampfgruppes motorized column was hit by a Katyusha barrage, and any further forward drive would be met by a hailstorm of fire from heavy machine-guns, mortars and anti-tank guns.

Waffen-Obersturmbannführer Aperats immediately had all the available units open fire, and at the same time he ordered the newly arrived main column to attack across the Ssinjaja. Although he himself was wounded by a mortar splinter on the right forearm, he personally took over the attacking spearhead and stormed across the Ssinjaja bridge towards the forest edge on the northern bank.

His men were inspired by his example, and under his command they succeeded in creating a bridgehead and securing the forest edge with the foremost elements by 18:00. The Russians immediately launched their own counterthrusts just after this hour, and although they reached the southern edge of the forest along both sides of Waffen-Obersturmbannführer Aperats attacking group they failed to actually throw his force back. However from these positions they were able to put the bridge under concentrated fire from anti-tank guns, mortars and Katyushas, making it impassable.

Waffen-Obersturmbannführer Aperats therefore repositioned the elements of the Kampfgruppe that were still on the southern bank to the west of the bridge. They had to swim across the Ssinjaja river and launch an attack against the Russians right wing. By 19:00 the hills between the river bend and forest edge to the west of the road were in friendly hands.

Just after 19:00 a force of 20-30 Russian tanks burst out of the forests on both sides of the road and attacked the bridge.

During this attack Waffen-Obersturmbannführer Aperats was mortally wounded by a tank round. The Kampfgruppe was thus robbed of its heroic commander, and despite bitter resistance they were unable to intercept the armoured attack. They were thrown back to and across the river. The tanks meanwhile rolled across the bridge and into the village, where they proceeded to scatter the Kampfgruppe, kill the wounded soldiers in the village and annihilate a large part of the Kampfgruppe.

Only a few survivors under the leadership of the acting Kampfgruppe commander (Waffen-Hauptsturmführer Hazner) managed to reach friendly lines after days of deprived marching through swamp and forest.

However, by its self-sacrificing actions the Kampfgruppe had achieved a greater victory. The Russian tanks had been all but ready to attack towards the north, however they were instead compelled to turn around and deal with the German Kampfgruppe in their rear. After this they were not sent back for a thrust to the north, but were instead apparently dispatched towards the west.

If the Russians had attacked the comparatively weak southern wing of the 15. Waffen-Gren.Div. der SS with this strong tank support then they would have almost certainly succeeded in achieving a major breakthrough towards Krassnyj. This would have resulted in disastrous consequences for the front of the entire Armee.

The capture of Krassnyj would have cut off 3 divisions that were reliant on the KrassnyjLjamony road. The already very difficult withdrawal movement back to the Latvia Position would then only have been made possible by attacking towards the rear.

Waffen-Obersturmbannführer Aperats therefore prevented the Russians imminent breakthrough to Krassnyj as a result of his bold and independent decision to attack the enemy in the rear. In this context he brought about a battle-deciding success and significantly contributed to the success of the difficult operation to occupy the Latvia Position.

His inspiring energy and personal bravery gave moral backbone to his subordinated Latvian and German men, even in desperate situations. His men continued to attack through the difficult terrain under his inspiring leadership despite being cut-off and physically exhausted, and in the process the enemy suffered major reverses wherever they struck.

Waffen-Obersturmbannführer Aperats will live on as a shining model of heroic soldiery in the Latvian Legion.

I hold him as particularly worthy of being posthumously awarded the Knights Cross to the Iron Cross.

The following supplementary details provide further insight into this action:

1.) The partisan resistance mentioned in this document consisted of 2 battalions.

3.) 8 Soviet tanks of the group that attacked at the end were destroyed with Panzerfausts. 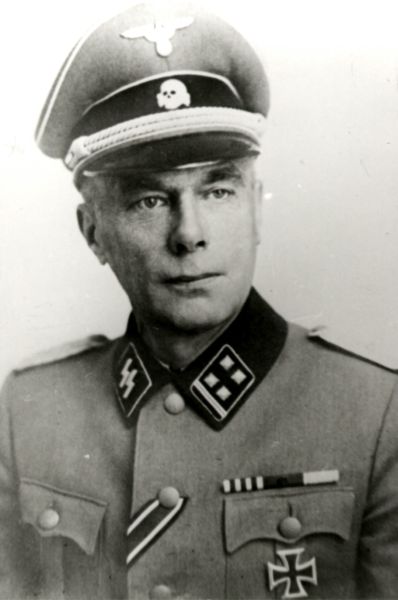