The son of Polish-born Swiss parents, Jan Zumbach was registered as a Swiss citizen and hid his nationality in order to join the Polish army in 1934. He served as an infantryman until 1936, when he transferred to the Polish Air Force. After graduating from flying training in 1938, he was posted to 111 Eskadra Mysliwska.

Zumbach did not fly during the German invasion of Poland due to a broken leg which he received in a flying accident during the summer of 1939. He returned to his unit only to be evacuated to France, via Rumania. While in France he flew the Morane 406 and Curtiss Hawk 75 with GCII/55. In June 1940 he traveled to England by boat, and on August 2, he received a posting to become one of the founding members of the No. 303 Polish Fighter Squadron. During the Battle of Britain, Zumbach scored eight confirmed kills and one probable, mostly against Messerschmitt Bf 109 fighters. A Luftwaffe pilot flying a Bf 109 shot Zumbach down over Dover on May 9, 1941, when he was returning from a mission, but he bailed out unharmed.
Zumbach became one of the first Allied pilots to experience combat with the German Focke-Wulf Fw 190 when he damaged, and was damaged on October 13. In May he took command of the squadron, a post he held from May 19, 1942, until November 30, 1943.

Zumbach's victory tally was marked with German crosses under the cockpit on the port side; confirmed kills were outlined in white, probable kills in red, and damaged aircraft with no outline.

After handing over command of 303 Sqn to Squadron Leader Bieñkowski Zumbach spent a year in staff appointments, including at the Polish Air Force Staff College. He returned to flying duties as the commander of the 2nd Polish Air Wing, No 133 Wing. On September 25, 1944, he scored his final victory of the war, a probable kill against an Fw 190 over Arnhem.
On January 30, 1945, he was posted to a non-flying tour at HQ No. 84 Group. While flying an Auster that was used to visit units under the Group's command, Zumbach made a navigational error and ran out of fuel. He force-landed in enemy territory and spent the final month of the war as a prisoner of war. His final victory tally was 13 confirmed kills, five probables and one damaged.

Zumbach was demobilised in October 1946 but continued to fly for a living. Under a Swiss passport, he flew contraband around Southern Europe and the Middle East. In January 1962 he was asked by Moise Tshombe to organise the key segment of Katanga, commanding it until December 1962.
He went on to deal in second-hand aircraft before again becoming a mercenary as he organised and commanded the air force of Biafra.
In 1975, he published his autobiography, originally available in French under the title 'Mister Brown: Aventures dans le ciel', it was subsequently published in German and English under the title 'On Wings of War: My Life as a Pilot Adventurer.'

Second DFC awarded as a bar for on the ribbon of the first DFC. 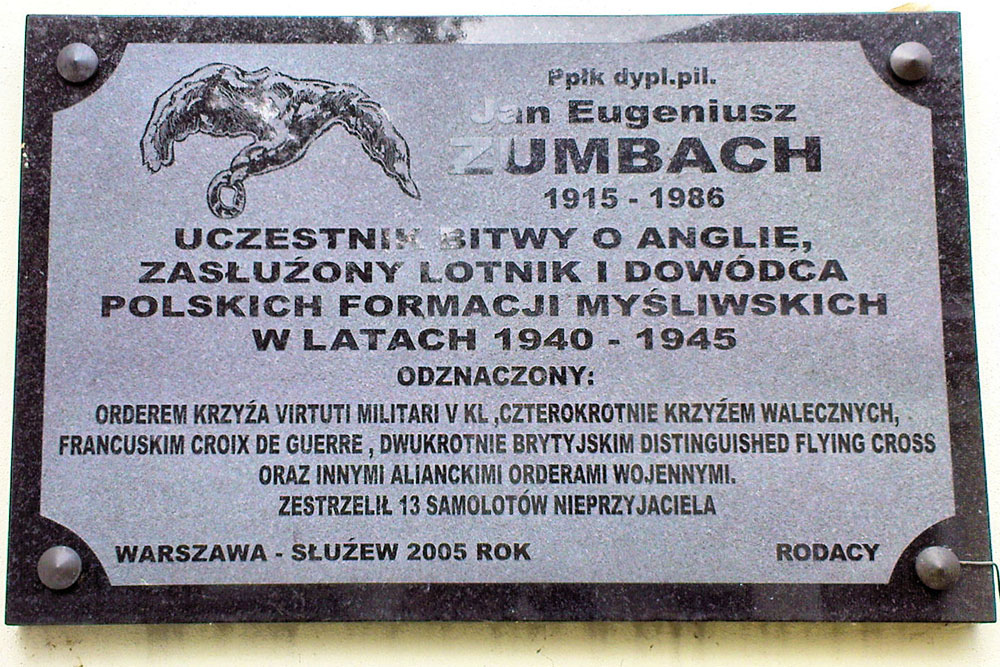