Citation:
"In order to stop an advance into the Chin Hills of greatly superior Japanese forces it was essential to capture Basha East hill which was the key to the enemy position.
Two assaults had failed but a third assault was ordered to be carried out by two platoons of Havildar Gaje Ghale's company and two companies of another battalion.
Havildar Gaje Ghale was in command of one platoon: he had never been under fire before and the platoon consisted of young soldiers.
The approach for this platoon to their objective was along a narrow knife-edge with precipitous sides and bare of jungle whereas the enemy positions were well concealed. In places, the approach was no more than five yards wide and was covered by a dozen machine guns besides being subjected to artillery and mortar fire from the reverse slope of the hill.
While preparing for the attack the platoon came under heavy mortar fire but Havildar Gaje Ghale rallied them and led them forward.
Approaching to close range of the well-entrenched enemy, the platoon came under withering fire and this N.C.O. was wounded in the arm, chest and leg by an enemy hand grenade.
Without pausing to attend to his serious wounds and with no heed to the intensive fire from all sides, Havildar Gaje Ghale closed his men and led them to close grips with the enemy when a bitter hand to hand struggle ensued.
Havildar Gaje Ghale dominated the fight by his outstanding example of dauntless courage and superb leadership. Hurling hand grenades, covered in blood from his own neglected wounds, he led assault after assault encouraging his platoon by shouting the Gurkha's battle-cry "Ayo Gurkhali"
Spurred on by the irresistible will of their leader to win, the platoon stormed and carried the hill by a magnificent all-out effort and inflicted very heavy casualties on the Japanese.
Havildar Gaje Ghale then held and consolidated this hard won position under heavy fire and it was not until the consolidation was well in hand that he went, refusing help, to the Regimental Aid Post, when ordered to do so by an officer.
The courage, determination and leadership of this N.C.O. under the most trying conditions were beyond all praise.

Later promoted to the rank of Hon. Captain. 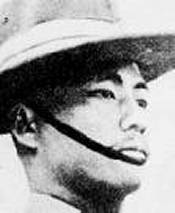