I Was There! - Men, Mules and Mud I Saw on Monte Camino

One of the key heights on the road to Rome, Monte Camino enemy positions were broken into by the 5th Army by December 7, 1943. War Correspondent Alexander Clifford described appalling conditions mastered by the foot-slogging troops, in this vivid dispatch written on the night of Dec. 4, published here by arrangement with The Daily Mail.

They were fighting in the rainclouds on Monte Camino all today. Just because this battle is so big and serious, it is not moving fast. On paper today's results were the occupation of a few knobs and peaks and crests which have numbers, because they have never been important enough to have names.

But to get them there was expended a wealth of bravery and endurance in conditions as appalling as anything we have met in this war. As important as anything else in this battle is a path. It is a horrible, steep, twisting mule-path which climbs the barren side of the mountain. Now history is flowing along it. It is as literal a lifeline as ever existed.

When I climbed up it this afternoon there was a yellow stream of rainwater cascading down it. The little pebbles and the large boulders seemed slippery whatever sort of boots you had on. But if you didn't walk on stones you were walking in brown mud, which might only be three inches deep but might suddenly deepen to 15 inches.

The path was so steep that you ha to lean right forward to keep your balance, and in five minutes you were sweating, despite the bitter, driving rain. All day it rained with a violence that would have created records in England, but the supply column moved steadily like an endless band. Everything depended on it.

Bowed men in tin hats and greatcoats splashed to the waist in mud, with 40 lb. boxes of rations on their backs. Their faces dripped with rain and sweat. Sometimes they stumbled on slippery rocks and dropped to their knees in the stream. But the check was only momentary, and none seemed to stop for rest. Other men were festooned with ammunition. Others had big, blue haversacks filled with all sorts of odd spare parts which were needed. 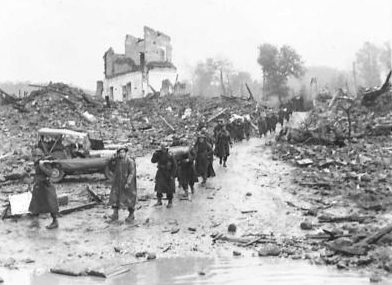 Stretcher bearers move towards the front line on the 5th Army's Camino sector. They are shown passing through the ruins of San Clemente at the base of the famous Monastery Ridge, where fierce fighting resulted in the announcement of an Allied victory on Dec. 8, 1943. The rigorous conditions imposed by rain and mud are described by an eye witness in this and the preceding page. Photo, British Official.

There were mules scrambling up laden with blankets. They were driven by blasphemous British troops who went past grumbling softly that they were hired as soldiers, not muleteers; someone had to drive the mules!

Most men had bulky shapeless gas capes against the rain. Some wore sacks over their heads like coalheavers to keep the rain from running down their necks. It wasn't a welldressed army, but it was a very efficient one. Every so often they had to clamber aside and lodge themselves against some boulder to let the down traffic past, including wounded borne shoulder-high on stretchers by four men each.

One moment the column stopped with a jerk and all heads swung up the cliff top. The Germans had begun to lob mortar shells over. But there was nothing much anyone could do. You could lie face downwards against the banks if you liked, bit it didn't protect you much, and you got up dirtier and wetter than before. The best thing was to climb on. The men, fighting in the swirling mists at the top were living the life supplied to them by that one mule track. Everything they ate was cold and rain-sodden. Only an idiot could be cheerful in these conditions. No one could enjoy doing these things. Yet the grumbling one heard was not sullen or bad-tempered. Men didn't seem to suggest that too much was being asked fo them.

Scattered round in barns and stables and wine cellars, unit headquarters were fighting to keep the battle going. I suppose half a dozen times today I heard conversations like: "Number Nine have pinched four of our mules? ... That's a bloody bad show. You'd better pinch some from someone else. ... Listen, I've got to have those mules; we've got to get greatcoats and mortar-bombs up quickly ... Yes, both coats and bombs; they're calling out for them ... That's right up towards the convent, bit it's a monastery, not a convent - can't you tell the difference?"

It has been an unceasing strain to keep this battle supplied. But the battle itself has started very well. It is a fight for one isolated hill, a hill so formidable that it was a major problem even getting on to it to meet the Germans. It seems that our concentrated artillery smoothed the path for the initial assault, bit the enemy is holding on with skill and tenacity, and every yard is being contested. Monte Camino will be remembered as one of the big battles of the campaign.

Historical context, by the webmaster

Previous and next article from I Was There! I Was There! - I Left My Pots and Pans and Downed a Bomber!

Ship's cook, Petty Officer J. H. Hubbard, of the cruiser Aurora on service in the Mediterranean, had already been mentioned in dispatches when he achieved the further distinction of shooting down a Ge

I Was There! - Japanese Night-Prowlers Routed in the Solomons

New Zealand and U.S. troops landed on Mono Island (known also as Treasury Island) in the Solomons, S.W. of the Shortland Islands, on October 26, 1943, and were in complete occupation by November 3  a

Our Monitors Help the Land Fighting in Italy

Seldom in the news, but doing a magnificent and highly important job, the Navy's monitors are specialized warships with a single purpose  the smashing of land targets. How these vessels, armed with 1

The War at Sea

Seldom has an enemy loss given greater satisfaction to the Royal Navy than the sinking of the Scharnhorst in a night action. It is not generally appreciated that she was the ship which, in company wit