The German supremacy in Northwestern Europe was one of Dwight Eisenhower's main concerns in the run-up to D-Day, seeing as the Germans had over 60 divisions in that area. If only a minority of those troops would be sent off quickly to reinforce the front after the Allied landing, the Allies would have a serious problem. It would have taken them months to get an equal-sized force on the ground. To prevent this problem, two plans were designed: 'Bodyguard', which aimed to misdirect the Germans, and the 'Transportation Plan'. The latter was designed to isolate the Norman battlefield by bombing the German transport lines, thus keeping the Germans from reinforcing the front. This way, the German upper hand would be a lot smaller, and would give the Allies time to build up a considerable force in the bridgehead. The plan, however, sparked heavy debate at the Allied High Command.

The Transportation Plan stemmed from an analysis of the Italian railroad bombings, by Solly Zuckerman. Solly, a South-African professor in natural sciences, worked as an advisor in Air Chief Marshal Sir Arthur Tedder's staff. Following the analysis, he studied the possibilities and possible consequences of bombing the railroads in Northwestern Europe. He then developed a plan to disable the French rail network within three months. This would force the Germans to transport by road, making them much more vulnerable to aerial attacks. General Dwight Eisenhower was positive about the plan, and wanted to use the formidable Allied Airforce in preparation of D-Day. They could isolate the Norman front, stopping the Germans from bringing in supplies and reinforcements.

Eisenhower wanted to use the largest part of the Allied Air Force for this plan. To avoid undermining operation Fortitude (which aimed to deceive the Germans by convincing them that the invasion would take place in Calais), it was decided that for every target bombarded in Normandy, two in Calais would be bombed as well. During this, 25% of the Allied Air Force would continue bombing targets and cities in Germany, chosen by Air Marshal Sir Arthur Harris (commander of the Royal Air Force) and Lieutenant General Carl Spaatz (commander of the United States Army Air Force).

Regarding the goal of the bombings, the definitive Transportation Plan encompassed more than Zuckerman's original plan, which only really focused on the railway network. The definitive plan, mainly drawn up by Tedder, also included bombings on coastal defensive structures, firing emplacements, V1 and V2 rocket launch installations or, anti-aircraft emplacements, traffic junctions, bridges, marshalling yards, storage facilities and factories, but also airports that were being used by the Germans. Another important goal of the Transportation Plan was to stop the German Luftwaffe to gain superiority in the air. These targets were mainly placed in Normandy and Calais, but also in Eastern France, to isolate the battlefield as much as possible, and to strike the Luftwaffe as hard as possible. Nearly all types of aircraft would be deployed during the Transportation Plan. Heavy and medium bombers would attack the larger targets, like coastal fortifications. Light bombers and even fighter planes would take care of the smaller targets, like anti-air emplacements, trains and convoys.

The Transportation Plan sparked discussion within the Allied High Command. The first discussion took place before the plan was even properly completed. This transpired because Eisenhower felt that he needed to be in charge of the air force in the run towards, and during, the execution of Operation Overlord. Only then would he be able to isolate the battlefield and be able to guarantee aerial dominance, which the Allies so desperately needed. Eisenhower thought that for a successful allied invasion to happen, good cooperation between the various parts of the army (infantry, air force and navy) would be required. The commanders of the British and American Air Forces, Harris and Spaatz, did not agree. They saw the air force as an independent weapon, which through continuous bombing could bring Germany to its knees. Harris mainly concentrated on breaking the German citizens' morale by bombing German cities. Spaatz, in turn, concentrated on industrial targets, hoping to stop Germany's war industry. Spaatz and Harris were not enthusiastic about crossing the canal, and were even less eager to give up their planes in favour of tactical support. In the end, Eisenhower gained control of the air force until the end of Overlord, after General George Marshall had chosen his side in the argument between Eisenhower and the Airforce Commanders.

In addition, there was heavy discussion about the possible consequences of the Transportation Plan for the French citizens. Prime Minister, Winston Churchill in particular questioned the morality of the bombings. The British estimated that between 80,000 and 160,000 French citizens could perish during the inaccurate nightly bombings. A death toll that high would be a stain on the Royal Air Force's good name. Moreover, the British War Cabinet feared that the high number of civilian casualties would strain the British relationship with France even further that, after the attack on the French fleet in North Africa (to prevent it from falling in to German hands), was not so great to begin with. They believed that the German propagandists would be sure to use this to their advantage.

When the plan was almost finished in April 1944, Winston Churchill insisted Eisenhower revise the plan. Eisenhower ignored his urgent appeal, and said that the French citizens were now slaves of the Germans, and that every possibility to free them from their German overlords should be utilized. Eisenhower also felt that not going through with the Transportation Plan would increase Operation Overlord's chance of failure significantly. The latter managed to convince Churchill. The British had been skeptical about the chance of success an attack across the Channel would have, for years. This meant they could not afford not to utilize every weapon at their disposal to make the operation a success. In spite of this, Churchill still contacted president Franklin Roosevelt, requesting he alter the plan. He refused. In the meantime, Eisenhower's Chief of Staff, Major General Walter Bedell Smith, involved the French in the argument. Major General Pierre Koenig, commander of the French forces in Great-Britain said: "This is war, meaning one should expect people to be killed." When faced with the predicted number of casualties, he said: "We would accept twice that amount if it would rid us of the Germans". Now, nothing stood in the way of executing the plan.

At the end of April, the Transportation Plan was set in motion. On the 27th of April 1944, American B-17 bombers of the 91st Bombardment Group were the first to fly from their base in Bassingbourn to bomb gun emplacements at La Glacerie, near Cherbourg. At first they mainly bombed big targets, like gun emplacements, concrete fortifications and V1 and V2 launch installations. Airports and storage facilities were later added to that list. This gave the Germans little time to recover from the damage, and prepare for the Allied invasion. The fighter planes and fighter-bombers were given the order to, besides their target, perform armed reconnaissance missions. This meant shooting at anything that might be hostile.

The Transportation Plan proved to be a success for the Allies. At the end of May, the Luftwaffe was almost annihilated in Northwestern Europe, even though its defeat cannot be completely attributed to the Transportation Plan, as the total aerial warfare going on at the same time played an equally large role. In total, the Germans would lose 2262 fighter pilots in the five months before D-Day, together with more than half of the Luftwaffe's total airplanes. The greatest result however, was achieved on the transport area, which was the main goal of the Transport Plan. The German rail traffic in Northern France was brought to an almost complete halt. The German Ministry of Transport said at the end of May: "The attacks of the past few weeks have brought systematic destruction to all main railroads [..] strategic movement of large amounts of German troops by rail, is practically impossible.

The Allies had thrown around 76,000 tonnes of bombs on the French railroads, destroying more than three quarters of the French railway network, and destroying more than 1,500 locomotives. Between the 19th of May and the 6th of June, the usage of the French railways decreased by around 60%. Traffic was also disrupted at many locations, since many bridges were destroyed as well. On the 1st of June, for example, 23 out of 26 bridges crossing the Seine were destroyed by the Allied Air Force. Most bombings on the concrete fortifications, gun emplacements and launch installations were less successful than the attacks on traffic junctions. This was, in part, a result of the inaccuracy of the heavy bombers, especially at night. More than a 1,000 bombs, for example, were dropped on the battery of Merville. Only fifty of which landed within the defensive girdle, and only two actually hit a bunker.

The bombings, as expected, caused many casualties among the French populace. Several thousands died, a lot less than 80.000 to 160.000 the British War Cabinet had predicted. There is no proof that the Allied bombings on D-day deteriorated the relationship between the French citizens and the Allied forces. Ten thousand men of Organisation Todt had to repair the destroyed railroads and were, because of this, unable to perform maintenance on the Atlantikwall. 15,700 men, most of whom forced labourers, had to repair the damage to other targets. In the end, most of the Transportation Plan's goals were met. Normandy was practically isolated, and it was impossible for the Germans to send large amounts of reinforcements to the future battlefield. After the landings, they would have to do this by foot at night, seeing as the Allies practically controlled the Norman sky. The Transportation Plan, in doing this, created the necessary circumstances for a landing on the French mainland.

D-Day
The day of the long awaited invasion of western Europe in Normandy, France, 6 June 1944. After a long campaign of deception the allies attacked the coast of Normandy on five beaches to begin their march on Nazi Germany. Often explained as Decision Day, though this is entirely correct. The D stands for Day as generally used in military language. In this case it means an operation beginning on day D at hour H. Hence Jour J in French.
front
Largest Soviet ground formation. It was attached to a certain area which gave its name to the units involved. For instance the Voronezh front.
infantry
Foot soldiers of a given army.
invasion
Armed incursion.
Luftwaffe
German air force.
Marshal
Highest military rank, Army commander.
rocket
A projectile propelled by a rearward facing series of explosions. 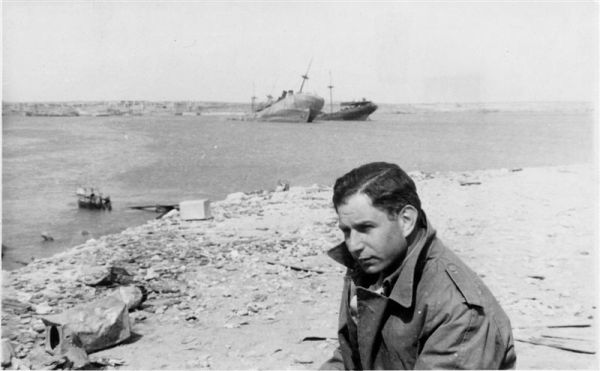 Solly Zuckerman, the original inventor of the plan. Source: The National Archives. 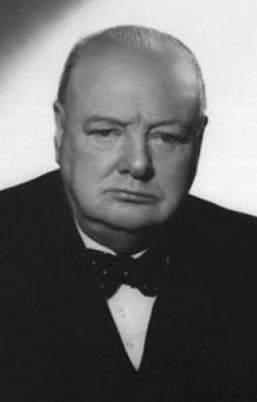 Churchill, the biggest opponent of the plan. 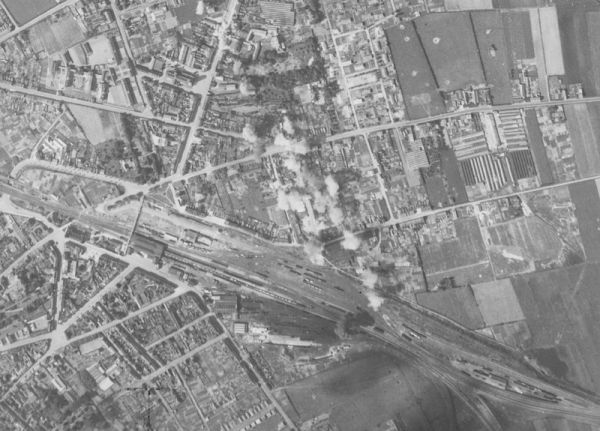 Attack on a marshalling yard at Hazebrouck (Nord-Pas-de-Calais). Source: The National Archives. 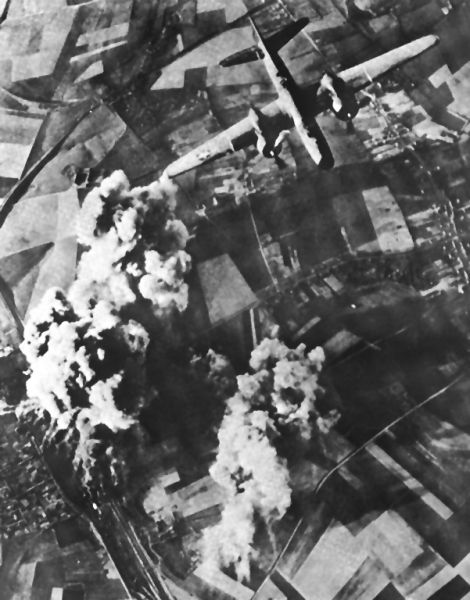 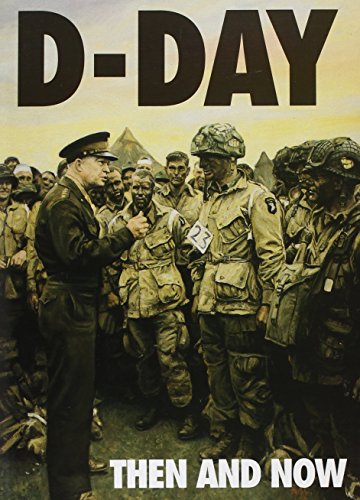