Fedor von Bock was born December 3rd 1880 in Kustrin (now Kostrzyn, Poland), and was the son of Moritz von Bock, officer in the army. His mother was a distant relative of the future Prussian Minister of War and Chief of the General Staff Von Falkenhayn.

In 1898, after having completed officers training, Von Bock joined the 5th Infantry Guards Regiment as a Lieutenant. Serving in this unit, Von Bock was promoted to battalion adjutant in 1905, in 1907 to regimental adjutant and in 1910 he started training to be admitted to the General Staff, being admitted as captain in 1912. A year later, Von Bock joined the General Staff of the Guard Corps with which he entered World War One.

During World War One, Von Bock distinguished himself as staff officer and battalion commander at both the western and eastern front. In 1916, he was promoted to major and in 1918, he was awarded the Pour le Mérite for his excellent services during the German offensive in Picardia.

After the war, Von Bock joined the Reichswehr, ultimately rising to the rank of General der Infanterie. In 1929 he was admitted to the General Staff of Gruppenkommando 1 in Berlin and in 1931 he was appointed commander of Wehrkreis II in Stettin (now Szczecin in Poland).

When Hitler (Bio Hitler) came to power in 1933, Von Bock took a neutral attitude towards the new National socialist regime. After the reorganization and the introduction of conscription, in other words during the expansion of the German army, Von Bock was given command of the newly established Gruppenkommando 3 in Dresden. In 1936, Fedor von Bock married Wilhelmine von der Osten. In this marriage, one daughter was born.

On March 1st, 1938, Von Bock was promoted to Colonel general and on March 12th, German troops marched into Austria and initiated the Anschluss. During this non-violent invasion, Von Bock was commander of 8th Army, the spearhead of the German army of occupation. On October 1st of the same year, he was involved in the non-violent capture of the Sudetenland and on November 1st, he was given command of Heeresgruppe 1 (army group) in Berlin.

When war broke out in September 1939, Von Bock, commander of Heeresgruppe Nord, was involved in the attack on tiny Poland. He launched his attack from Pomerania and East-Prussia. After the successful campaign, he was awarded the Ritterkreuz (Knights Cross) on September 30th, 1939. In May and June 1940, Von Bock was in command of Heeresgruppe B during the attack on France and the Low Countries. After the glorious victory over France, Von Bock took part in the victory parade on June 14th near the Arc de Triomphe in Paris. Five days later, Von Bock was promoted to Feldmarschall by Hitler. In October 1940, he was appointed military commander of German occupied Poland.

During Operation Barbarossa, launched on June 22nd, 1941, Von Bock was in command of Heeresgruppe Mitte (center), the largest of the three army groups. After the successful encirclement of Biyalistok and Minsk, the Heeresgruppe advanced in the direction of Smolensk and Moscow. Von Bock however refused to implement the notorious Kommissarbefehl. He also was at odds with Hitler about the strategy to be followed. His nephew, Henning von Treschkov attempted to persuade Von Bock to speak out against the terror of the Einsatzgruppen (see Einsatzgruppen Art.) and to support a coup but Von Bock rejected this. In October, as commander of Heeresgruppe Mitte, he had the chance to enter the history books as the conqueror of Moscow but Operation Typhoon failed, causing the arguments between him and Hitler to increase in December. After the crushing Russian counter attacks, Von Bock urged Hitler to allow a tactical withdrawal of the German army. As a result, Hitler forced him to retire on December 12th.

After the sudden death of Von Reichenau (Bio Von Reichenau) Von Bock was recalled to succeed him as commander of Heeresgruppe Süd (south). Various Russian counter attacks had to be quelled. During the subsequent German summer offensive in 1942, he had a head-on collision with Hitler again. He was a fierce opponent of the split up of Heeresgruppe Süd in Heeresgruppe A and B for the attack on Stalingrad and the capture of the Caucasus. Once again, Von Bock was sacked (July 15th) and relegated to the reserve.

In the remaining years of World War Two, Von Bock led a secluded life in Bavaria. After Hitlers death, he offered his services to the new  and last - Reichsregierung headed by Dönitz (Bio Dönitz) in Flensburg. In the last days of the war however, fate struck. On May 3rd, 1945, while driving to Flensburg in Schleswig-Holstein, Von Bocks car was attacked by R.A.F. fighter bombers. He was mortally injured and died the day after in the navy hospital in Oldenburg.

Feldmarschall von Bock did not match the stereotype of the ancient Prussian field marshal. He shared Heinz Guderians ideas about how the war should be waged, the reason for his continuous quarrels with Hitler. During World War Two Feldmarschal von Bock kept a diary that was published after the war.

front
Largest Soviet ground formation. It was attached to a certain area which gave its name to the units involved. For instance the Voronezh front.
Heeresgruppe
The largest German ground formation and was directly subordinate to the OKH. Mainly consisting of a number of Armeen with few directly subordinate other units. A Heeresgruppe operated in a large area and could number several 100,000 men.
Infantry
Foot soldiers of a given army.
invasion
Armed incursion.
marshal
Highest military rank, Army commander.
offensive
Attack on a smaller or larger scale.
Regiment
Part of a division. A division divided into a number of regiments. In the army traditionally the name of the major organised unit of one type of weapon.
Reichswehr
German army during the Weimar republic.
strategy
Art of warfare, the way in which war should be conducted in general. 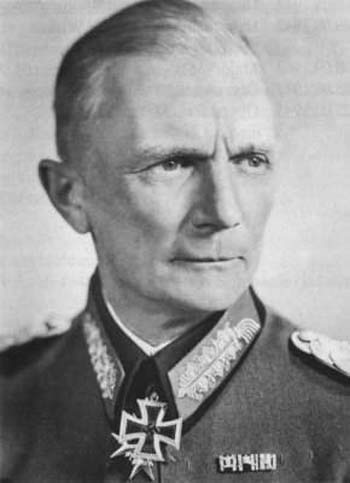 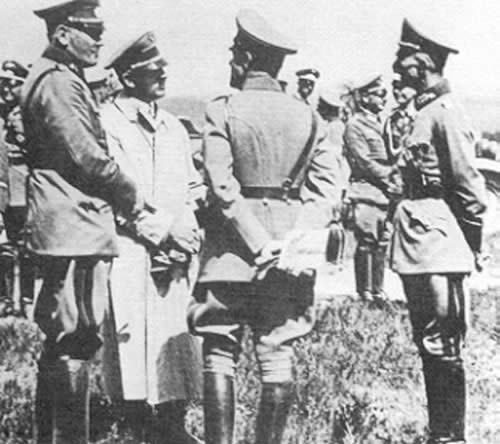 From left to right: Blomberg, Hitler, Beck and Von Bock.

Translated by:
Arnold Palthe
Article by:
Tom Notten
Published on:
19-10-2016
Feedback?
Send it!