Aleksandr Mikhailovich Vasilevski was born September 30th, 1895 in Novaya Golshikha, a village east of Moscow. His father was a Russian-orthodox priest. Although Alexandr wanted to become a farmer or a teacher he did attend the Spiritual School in Kineshma and subsequently the Spiritual Seminar in Kostrona. He did not graduate however from this seminar as he joined the military.

In January 1915, Vasilevski joined the Russian Czarist Army. In February he enrolled in the Militär-Rechtsakademie in Moscow and started a four months course to become an officer. During World War One Vasilevski was promoted to Captain and he served as staff officer. He gained valuable combat experience in battles such as the Brusilov offensive of 1916. He was demobilized after the war but in May 1919, he joined the Red Army. He participated in the Russian civil war as commander of a company, of a battalion and as assistant regimental commander. Next he was named commander of a divisional school. Vasilevski had administrative talents mainly and therefore he held several staff positions during the 20s but was placed in charge of a few battalions, regiments and brigades as well. He acquainted Joseph V. Stalin (Bio Stalin) and Vyacheslav Molotov (Bio Molotov) which accelerated his career. In 1931 Vasilevski was given command of the Volga Military District. In the fall of 1936, he took up studies at the General Staff Academy but dropped out prematurely. In 1937 he joined the General Staff, the beginning of many years of service on the General Staff. On August 16th, 1938, he was promoted to kombrig , the lowest rank of a senior officer. Thanks to his friendship with Stalin he was spared the Great Purges of 1937 and 1938.

April 5th, 1940, Vasilevski was promoted to komdiv and on June 4th to General-major. In this period he was head of the Department of Operations of the General Staff. His promotion to Lieutenant-general followed on October 28th, 1941 and on May 21st, 1942 to Colonel-general. Vasilevski succeeded the sick and incapable Marshal Boris M. Shaposnikov in June 1942 as chief of the General Staff, a function he would hold for 30 months. Of those, he only spent 12 months in Moscow as he was obliged to spend much time at the front as Stavka representative. During this period, General Aleksei I. Antonov (Bio Antonov), head of Operations, was acting chief of the General Staff and from May 1943 onwards, Antonov was officially first deputy chief of the General Staff. Along with Georgy Zhukov (Bio Zhukov), Vasilevski was the brains behind Operation Uranus, the encirclement of the hostile troops at Stalingrad. Together with Konstantin K. Rokossovski (Bio Rokossovski) and Nikolai N. Voronov he also helped prepare Operation Ring, the final offensive at Stalingrad. Usually, the trio Vasilevski-Zhukov-Antonov was the brains behind the massive operations of the Red Army but the honor usually went to Stalin or Zhukov. Owing to the success of the operations at Stalingrad, Vasilevski was promoted to General of the Army on January 18th, 1943, the same day Georgy K. Zhukov was promoted to Marshal of the Soviet Union. After the victory, Vasilevskis contribution to it was acknowledged as having been considerable after all and that is why Stalin promoted Vasilevski as well to Marshal of the Soviet Union.

During the battle at Kursk, Vasilevski coordinated the operations of the Voronezj and Steppe fronts and later that year in the Donbass. In 1944 he commanded operations on the Crimea and Operation Bagration, the massive Soviet summer offensive in Byelorussia. In April 1944, Vasilevski was awarded the Orden Pobeda (Order of Victory) and on July 29th he was given the title Geroi Sovetskogo Soyuza (Hero of the Soviet Union), the highest Soviet decoration. In February 1945, Vasilevski became a member of Stavka and on February 20th, he was placed in command of the 3rd Byelorussian front, succeeding General of the Army D. Chernyakhovski who had died in battle. This meant leaving the General Staff after seven and a half years. With the 3rd Byelorussian front, he captured cities such as Königsberg, the present Kaliningrad.

After the surrender of Germany in 1945, Vasilevski and Antonov started to make plans for the campaign against Japan together. The plan entailed an invasion of Manchuria and parts of Korea and Japan and was code named Operation August storm. Vasilevski left for the Far East to take supreme command of the Soviet armed forces in the region. On August 8th, two days after the atomic bomb was dropped over Hiroshima, the Soviets declared war on Japan  a promise they had made to the U.S.A.  and three Soviet fronts, commanded by Vasilevski engaged the Japanese Kwantung Army. The operation was completed in less than a month. For this achievement, Vassilevski was awarded the Orden Pobeda once again on September 6th,1945 and on September 29th, he was given the title Geroi Sovetskogo Soyuza for the second time.

In 1946, Vasilevski was appointed chief of the General Staff once more. In 1949 he became Secretary of the Armed Forces and from 1950 onwards, he was Secretary of War. In 1952 he became a member of the Central Committee of the Communist Party. Following Stalins death in 1953, he was ousted as minister and from 1953 until 1957 he was deputy Secretary of Defense. Due to his long lasting friendship with Stalin, Vasilevski was no longer offered high ranking functions anymore as Nikita S. Chrushev was carrying through his policy of deStalinization. Vasilevski retired a year later in 1958.
Marshal of the Soviet Union Aleksandr Mikhailovich Vasilevski passed away December 5th, 1977 at the age of 82. The urn containing his ashes was placed in the wall of the Kremlin on the Red Square in Moscow.

Read more about the decorations of this person on WW2Awards.com

front
Largest Soviet ground formation. It was attached to a certain area which gave its name to the units involved. For instance the Voronezh front.
Hiroshima
City in Japan where the first operational atomic bomb was used on 6 August 1945.
invasion
Armed incursion.
Kremlin
Soviet administrative centre in Moscow.
Marshal
Highest military rank, Army commander.
offensive
Attack on a smaller or larger scale.
Red Army
Army of the Soviet Union.
Soviet Union
Soviet Russia, alternative name for the USSR.
Stavka
The high command of the Russian military forces in World War 2, chaired by Stalin. 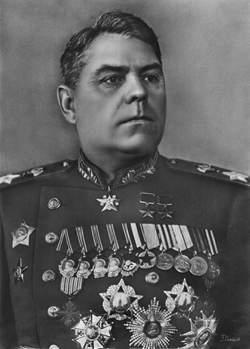 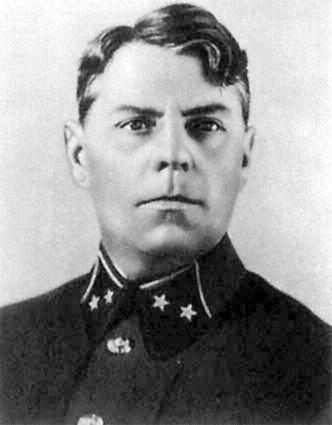 Vasilevsky as General-major in 1940 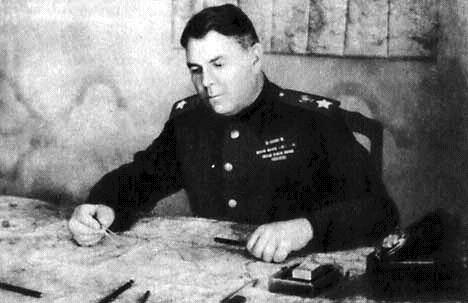 Vasilevsky working on a plan for an operation in Byelorussia, 1944 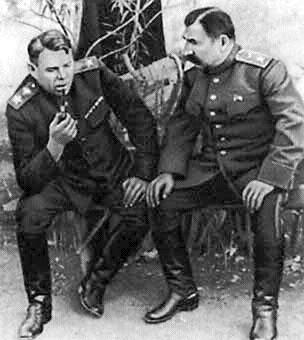 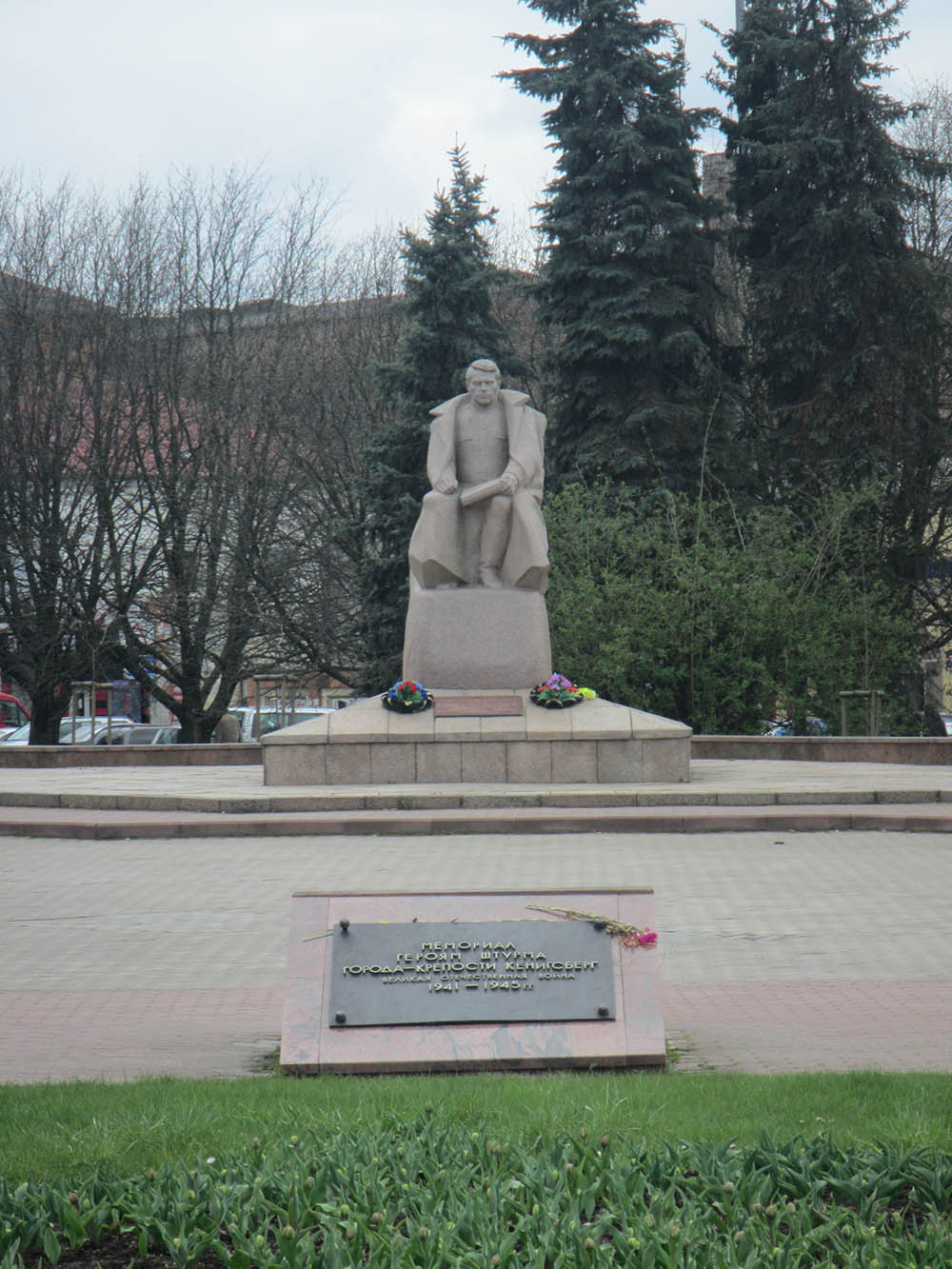