Africa Service Medal
This decoration was instituted in 1943 and awarded to all members of the Union Defence Forces (including non-South-African nationals) who participated in military operations in Africa up to May 13th, 1943, the day on which Africa was finally cleared of the enemy. There are two versions, a plain one for enlisted men and a silver version for officers. For medals awarded to Commonwealth military personnel, the recipient's name and service number were engraved on the rim.
The circular medal is silver and bears a map of Africa on the obverse within the inscription AFRIKA DIENS MEDALJE (Africa service medal), and on the other side a leaping springbok. The ribbon is 32mm wide, orange coloured with 3mm wide green (outer) and 3mm wide gold (inner) edges (described in Regulations as orange in colour of the shade hitherto worn on the shoulder straps of members of the Union Defence Forces, with the green and gold Springbok colours in vertical stripes on either side, the green stripe being on the outside). King's Commendation for Valuable Service denoted by Bronze Protea emblem on the ribbon. (The protea is the national flower of South-Africa.) 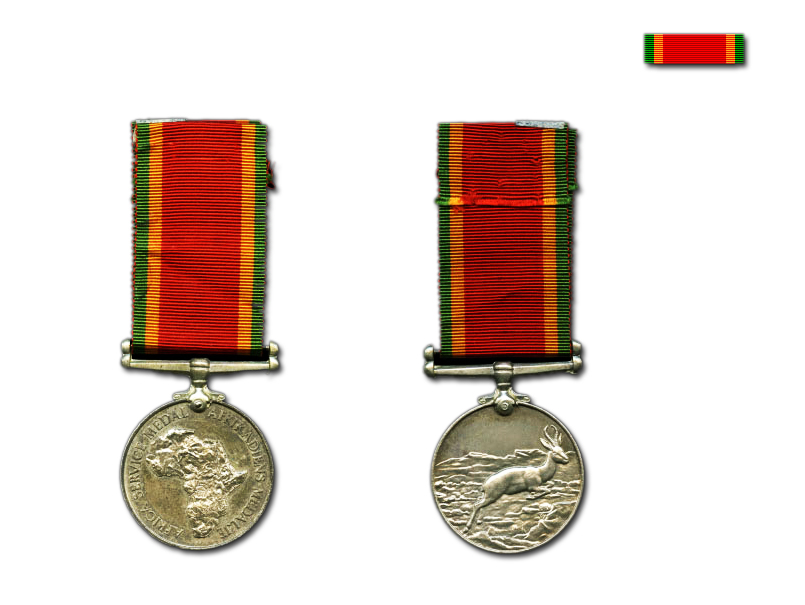