This Australian award was introduced in 1949 and issued to members of the Australian Armed Forces, Merchant Navy and civilians who served 18 months in overseas areas between 3 September 1939 and 2 September 1945 or 3 years at home between the same dates. Those who were killed or wounded in action or taken prisoner of war automatically were entitled to this medal regardless of length of service.

The obverse of this medal has the head of King George VI with the inscription : GEORGIVS VI D : G : BR OMN : REX ET INDIAE IMP:. The reverse bears the Australian Commonwealth Coat of Arms and the inscription : THE AUSTRALIAN WAR MEDAL . The dates 1939-1945 are shown on the below of the medal.

The medal was named in capital letters with the service number of the recipient, which was prefixed by a letter, which denoted the state from which the recipient was from. So the letter N was for New South Wales, Q for Queensland, S for Southern Australia, T for Tasmania, V for Victoria and W for Western Australia. 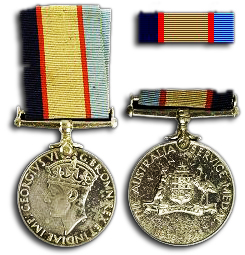