Born in Hong Kong of English parents, and educated at King William's College on the Isle of Man he graduated from the Sandhurst Military Academy in 1926 and joined the Manchester Regiment.
Churchill served through the Burma Rebellion of 1930-1932 before returning to England. Peacetime service seemed to grate on him as he found various ways to annoy his fellow officers. Inevitably Churchill resigned his commission after 10 years of service because he and his commanding officer agreed that they disagreed and went on to pursue a variety of things. He worked as a newspaper editor and took up archery. His eventual skill with the bow got him work in the movie industry on "The Thief of Baghdad" as well as "The Drum", and "A Yank at Oxford". He became so good at archery that he represented Britain at the world championships in Oslo in 1939.
Then in 1939 Poland was invaded he re-enlisted. He won his first military award in Dunkirk during the retreat to the Channel, when he hitched six trucks together to salvage a disabled British tank; although in the end he could not save the tank, he did rescue a wounded British officer.
In addition to his Robin Hood weaponry, Churchill also carried a basket-hilted claymore. Later on, asked by a general who awarded him a decoration why he carried a sword in action, Churchill is said to have answered: "In my opinion, sir, any officer who goes into action without his sword is improperly dressed."
After Dunkirk, Churchill returned to England and promptly signed up as a member of a new organisation known as the Commandos
When training was completed, he took part in the assault on the German base in Vaagso, Norway
In the commando raid in 1943 for capturing the battery at Salerno, he commanded number 2 Commando. Leading from the front, Churchill infiltrated the town with only a corporal in support. He kidnapped a sentry and forced him to make his comrades surrender. Churchill and the riflemen walked out of town with 42 prisoners and a mortar squad.
1944 saw Churchill and his Commandos in Yugoslavia, where they supported the efforts of Tito's partisans. The commandos raided the German-held island of Braè and assaulted hill 622. Only Churchill and six others managed to reach the objective. A mortar shell killed or wounded everyone but Churchill. The following moment, he was knocked unconscious by grenades and was flown to Berlin for interrogation after being captured. He was placed in Sachsenhausen concentration camp.
In September 1944, he and an RAF officer crawled under the wire through an abandoned drain and set out to walk to the Baltic coast, only to be recaptured near the coastal city of Rostock, only a few miles from the sea. In time, they were moved to a camp at Niederdorf, Austria. Churchill escaped from Niederdorf in April 1945 and walked 150 miles to Verona, Italy where he met an American armoured column.
The Pacific war was still going and Churchill was sent to Burma, where the largest land battles against Japan were still raging, but by the time he reached India, Hiroshima and Nagasaki had been bombed, and the war was effectively over.
In 1946 Twentieth Century Fox was making Ivanhoe with Churchills old rowing companion Robert Taylor. The movie studio hired Churchill to appear as an archer, shooting from the walls of Warwick Castle.
After World War II ended, Churchill qualified as a parachutist, transferred to the Seaforth Highlanders, and later ended up in Palestine as second-in-command of 1st Battalion, the Highland Light Infantry. In the spring of 1948, just before the end of the British mandate in the region, Churchill became involved in another conflict. Along with twelve of his soldiers, he attempted to assist the Hadassah medical convoy that came under attack by hundreds of Arabs. Following the massacre, he coordinated the evacuation of 700 Jewish doctors, students and patients from the Hadassah hospital on the Hebrew University campus on Mount Scopus in Jerusalem.
After Palestine, Churchill went on to serve as an instructor at a land-air warfare school in Australia and became a passionate surfer. He even designed and built his own surfboards. He retired from the army in 1959.
A biografy on Churchill called" Jack Churchill: Unlimited Boldness" came out in 1997 and was written by his biographer and close friend from the 2nd Manchester Regiment, Lieutenant-Kolonel Rex King-Clark. (ret.)

Recommendation:
"On 27 May this officer when in command of his company was continually attacked and eventually surrounded. Never the less he fought his two M.G.'s until all ammunition was finished when he distroyed his guns and extricated his command after dark passing trough the enemy lines and eventually reported back to Brigade Head Quarters. His action undoubtedly held up the enemy in that area for a considerable time enabling other troops to withdraw across the canal"

Citation:
"Lt-Col Churchill commanded No.2 Commando during the opposed landing in Marina Bay in the early hours of September 9th and throughout the subsequent actions at Vietri on September 10th,the Molina defile onthe 12th-13th September and the Piegolette on the 15th-16th September.In the initial assault Lt-Col Churchill landed with the first flight of the attacking troops.He organised and personally led th eattack on a German 4 gun battery.From 9th-13th Septamber Lt-Col Churchill on several occassions led counter-attacks against enemy infiltyration into his positions.By his cool courage and complete disregard of danger he personally inspired his men ,exhausted as they were, to hold the position.During this period he found a badly wounded man whom he and his adjutant carried back under fire on a rucksack to cover behind a ridge some 250 yds away.On the night of the 15th-16th September Lt-Col Churchill organised the advance of his Commando up the Piuelolette Valley, personally directing the advance by leading the right hand troop which had only one newky joined subalttern left On reaching the objective he went forward with one man into the village in which the enemy were sniping and throwing hand grenades.Although the bright moonlight made movement in the streets dangerous, his disregard of danger resulted in the capture of over 100 prisoners.Subsequently the capturd position wwas heavily attacked under cover of intense machine gun and mortar fire. Lt-Col Churchill at once left his headquarters and visited each of his troop post in turn proceeding alone in order not to endanger the lives of others. Throughout the dayLt-ColChurchill supervised our successful efforts to hold the determined onslaught on the enemy continually visiting our exposed positions. All through the foillowing night he remained on duty directing artillery and mortar fire onto the enemy patrols which were seeking to turn our position by the wooded valleys.When dawn broke Lt Col Churchill again had no sleep for 36 hours,had personally led two long and heavily opposed attacks and had inspired our troops to beat off all attempts by the enemy topenetrate positions.It is beyond doubt that Lt-Col Churchill's gallantry tilted the scales of battle on more than one occassion.The magnetic power of his personal leadership frequently rallied his exhausted troops when they could scarcely stagger forward. His powers of endurance and the cool and unflinching manner in which he exposed himself to danger so that he seemed to bear a charmed life were unquestionably a brilliant inspiration ranking with the highest traditions of the British Army."

Recommendation:
"On 19 March 1944, Lieutenant-Colonel Churchill, who commands No. 2 Commando, lead a combined force of Commandos and U.S. Operation Groups in an attack on the German Garrison of Solta Island. The sea approach was made in darkness and disembarkation was completed by 0200 hours. Lieutenant-Colonel Churchill led his heavily laden H.Q. in its rendezvous overlooking the town of Grohote where the enemy garrison was known to be located. The advance was difficult and slow, over rocky ground intersected by walls and piles of stones, and the guides called many halts because of suspected enemy machine-gun posts on the route. Whenever necessary, Lieutenant-Colonel Churchill went forward alone to investigate and when necessary to pick an alternative route. Enemy fire was opened at 0530 hours, by which time the Commandos had surrounded the town. An air bombing attack had been arranged at 0630 hours and the Commandos assault on the town was to follow this bombing ... At 0630 hours the bombing attack by aircraft was carried out, and immediately it was completed the Colonel gave the order to fix bayonets and enter the town. He himself led the advance and directed the house to house searches and street clearance in the face of enemy automatic fire and hand grenades which were thrown from windows and doors. The entire German garrison, consisting of an officer and 108 ranks, was either killed or captured, the Commando party led by the Colonel himself capturing 34 Germans including the Garrison Commander."

Second DSO received as a bar for on the ribbon of the first DSO. 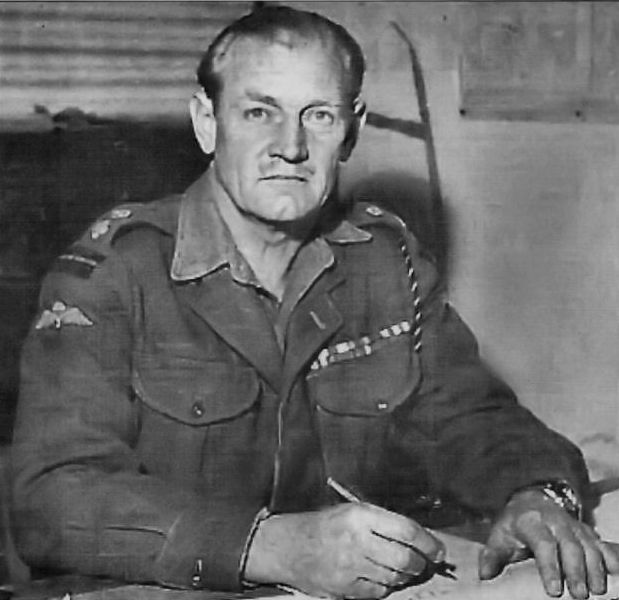