Erich von Lewinski was born November 24th, 1887 in Berlin, the tenth child of the Prussian general Eduard von Lewinski. After the death of his parents, Erich was adopted by his uncle, General Georg von Manstein. Erich von Lewinski took the surname of his uncle and embarked on a military career in the 3. Infanterie Guard Regiment in 1906. He served from 1911 to 1913 as adjutant of a Fusiliers battalion; in 1913 he entered military academy and was promoted to Leutnant.

He returned to the 3rd Infantry Guards regiment in 1914 and subsequently he served as adjutant of the 2nd Reserve Infantry Guards regiment, seeing action on both the western and the eastern front during World War One. While fighting on the eastern front, Von Manstein was injured and after having recuperated from his wounds, he was on the staff of various army groups. Von Manstein was promoted to Hauptmann in 1915 and held this post as staff officer until the end of the war in 1918.

After World War One had ended, Von Manstein joined the staff of the border forces in Breslau (Wroclaw in present Poland) and held this post until 1919 when he was called upon to help establish the Reichswehr. He became commander of a company in 1920 and commander of a corps in Stettin (Szczecin in present Poland) in 1922. In 1927, Von Manstein was promoted to Major while serving on the General Staff of the Reichswehr. At the end of the 20s, Von Manstein traveled through Europe, collecting information on the various armed forces and in 1932, he was promoted to Lieutenant colonel and was given command of a battalion. In 1933, Hitler (Bio Hitler) took power and the army was massively enlarged. Von Manstein was promoted again, this time to Major-general and named deputy Chief of Staff under General Fedor von Bock (Bio Von Bock). In 1938, Von Manstein was transferred again and became Chief of Staff of General von Leebs army group (Bio Von Leeb) which subsequently participated in the occupation of the Sudetenland.

Von Manstein was promoted to Lieutenant-general in April 1939 and in September he was appointed Chief of Staff of Heeresgruppe Süd (army group south) commanded by Von Rundstedt (Bio Von Rundstedt). During the preparations for the invasion of France and the Low Countries, Von Manstein drafted a plan of attack completely differrent from the Schlieffen plan used in 1914. Von Manstein wanted to avoid the Maginot line and advance through the Ardennes, considered impassable for tanks and subsequently strike towards the coast in order to encircle the Allied forces. The O.K.H. (Oberkommando des Heeres, supreme command of the army) rejected Von Mansteins plan but when Adolf Hitler laid his eyes on the plan on February 7th, it was approved after all. During the invasion of France and the Low Countries, which was launched on May 10th, 1940, Von Manstein was very successful as commander of XXXVIII Infanteriekorps. The Korps managed to be the first to cross the river Seine. For his successful conduct during May, Von Manstein was awarded the Ritterkreuz (Knights Cross) while Hitler took the honor, arguing he had devised the audacious plan of attack himself.

In February 1941 Von Manstein was put in command of the LVI Panzerkorps, newly established for Operation Barbarossa and part of Hoepners 4. Panzergruppe in Heeresgruppe Nord, commanded by Von Leeb. Between June 22nd and 26th, Von Manstein and his panzerkorps managed to advance 200 miles deep into Soviet territory and to establish a bridgehead on the river Dvina. Next, his panzerkorps struck further towards Leningrad but was brought to a halt at the gates of the city. On September 12th, Von Manstein was appointed commander of 11. Armee, part of Heeresgruppe Süd commanded by Von Rundstedt. Von Manstein and his 11. Armee penetrated the Russian defenses that were preventing the Germans from advancing into the Crimea. On November 16th, the peninsula was captured but for the heavily fortified port of Sevastopol. During this action, 11. Armee took over 400.000 prisoners, soldiers of the Red Army. In the first winter at the eastern front, Von Manstein managed to repulse the Russian counter attacks and in the spring of 1942 he laid siege to Sevastopol using extremely heavy railway guns. After fierce fighting, he captured the city in early July 1942 and Hitler promoted him to Feldmarschall.

After the capture of Sevastopol, 11. Armee including the heavy railway guns, were transferred to the northern part of the front at the end of July 1942 in order to finally break the defense of the besieged city of Leningrad. In the south however, a strategic disaster was unfolding for the Germans as the Red Army launched a counter attack, surrounding Paulus 6. Armee and units of the 4. Panzerarmee in the city of Stalingrad (Bio Paulus). Von Manstein was ordered to set up a relief action with the newly created Heeresgruppe Don. The tanks of this unit, commanded by Hermann Hoth (Bio Hoth) managed to approach the city to within 31 miles but as Hitler had prohibited Paulus to break out of the encirclement, Von Mansteins attempt at rescue failed. In the ensuing Russian counter attacks, Heeresgruppe Don was forced to pull back westwards over a distance of 124 miles. Von Manstein did see to it however that Heeresgruppe A was able to pull out of the Caucasus unscathed.

In February 1943, Von Manstein was put in command of Heeresgruppe Süd (consisting of the remnants of Heeresgruppe Don and Heeresgruppe A which had extricated itself from the Caucasus), and managed to recapture Kharkov and Belgorod in the most formidable manner, despite being outnumbered by the Red Army. These actions are still known as Von Mansteins Miracle, hence he was awarded the Eichenlaub (Oak Leaves) to his Ritterkreuz in March of the same year. Von Manstein had drafted a plan of his own for the coming summer offensive but it was rejected by his superiors (Hitler). Instead, another plan had been devised, code named Operation Zitadelle. Von Manstein and his Heeresgruppe were to advance on Kursk in order to encircle and subsequently annihilate the Russian forces in the huge salient west of the city. The Soviets had been warned of the German offensive plans by the Lucy spy ring and had constructed a series of immensely strong defensive belts. Nonetheless, 2. SS Panzerkorps, (part of 4. Panzerarmee, itself incorporated in Heeresgruppe Süd) commanded by Hausser managed to penetrate these defenses but collided head on with Rotmistrovs 5th Guards Tank Army near the village of Prokhorovka. The ensuing engagement would become known as the largest tank battle in military history. The battle ended in a stalemate however with horrendous losses on both sides. The Russians could easily replenish their losses but for the Germans, this battle of attrition meant losing the initiative on the eastern front forever. Never again would a massive German offensive be launched in the east.

Following the disaster of Operation Zitadelle, the Russians launched massive counterstrikes, driving Von Mansteins forces back beyond the right bank of the river Dniepr in September 1943 but in brilliantly executed defensive actions, Von Manstein did manage to inflict severe losses on the Red Army. Between October 1943 and January 1944, he again managed to stabilize the eastern front but he could not prevent a large force from being surrounded near the cities of Cherkassy and Korsoen in the Ukraine. Von Manstein set up an relief action but, contrary to Hitlers orders, he was forced to order the surrounded troops to break out. At the end of the day, only 34,000 out of a force of 56,000 managed to break out of the encirclement. Adolf Hitler gave his approval for the break out after it was over but as it was, Von Manstein had saved many more Germans from being taken prisoner by the Red Army.

On March 30th, 1944 Hitler relieved Von Manstein of his function after all because they were continuously at odds with each other over the strategy at the eastern front. Von Manstein advocated an orderly withdrawal to shorten the front line while Hitler insisted on holding on to the occupied areas. Notwithstanding, Von Manstein was awarded the Schwerte (swords) to the Eichenlaub of his Ritterkreuz. After his discharge, Von Manstein was admitted to a clinic because of complaints about his eyesight.

Von Manstein was not actively involved in the failed murder attempt on Hitler on July 20th, 1944 but he did know in advance the attempt was going to be made but in the end, he was spared the consequences. At the end of January 1945, he saw to it personally that his family was evacuated from Liegnitz (Legnica in present Poland) to Celle in west Germany to prevent them from falling in the hands of the revengeful Red Army.

In May 1945, Von Manstein was arrested by British forces and taken to a PoW. camp in Lüneburg before being transferred to Nuremberg to testify before the International Military Tribunal. Following the trial, he was transferred to a special camp in Great Britain where only high ranking German officers were housed. In 1948 Von Manstein finally returned to Germany where he was to stand trial for war crimes. The war tribunal in Nuremberg sentenced him to 18 years imprisonment but he was released in 1952 because of his poor health. During his imprisonment, Von Manstein wrote his memoirs, entitled "Verlorene Siege" (Lost victories), published in 1955. In 1956, Von Manstein was appointed advisor to the Bundeswehr and in 1958, the second part of his memoirs was published, entitled "Aus einem Soldatenleben 1887-1939" (From a soldiers life).
He lived with his family in Irschenhausen (Upper Bavaria) where he passed away on June 10th, 1973 at the age of 86.

Erich von Manstein will always be remembered as one of Germanys most brilliant military strategists of World War Two but, like so many other high ranking officers, he lacked the courage to contradict Hitlers decisions openly and when he did, it led to his immediate dismissal.

front
Largest Soviet ground formation. It was attached to a certain area which gave its name to the units involved. For instance the Voronezh front.
Heeresgruppe
The largest German ground formation and was directly subordinate to the OKH. Mainly consisting of a number of Armeen with few directly subordinate other units. A Heeresgruppe operated in a large area and could number several 100,000 men.
Infantry
Foot soldiers of a given army.
invasion
Armed incursion.
Maginot line
French defence line along the French-German border.
offensive
Attack on a smaller or larger scale.
PoW
Prisoner of War.
Red Army
Army of the Soviet Union.
Regiment
Part of a division. A division divided into a number of regiments. In the army traditionally the name of the major organised unit of one type of weapon.
Reichswehr
German army during the Weimar republic.
strategy
Art of warfare, the way in which war should be conducted in general.
Tank
A combat vehicle with heavy armour and heavy armament driving on tracks. The tank, despite its heavy weight, is very mobile and able to move along various types of terrain. These properties, along with heavy firepower and protecting armour, give the tank a big strike power.
war crimes
Crimes committed in wartime. Often concerning crimes committed by soldiers against civilians. 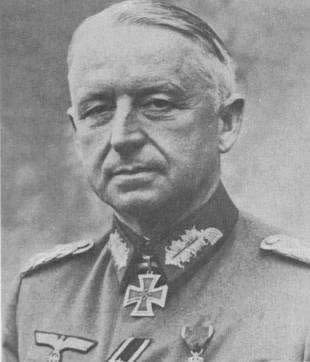 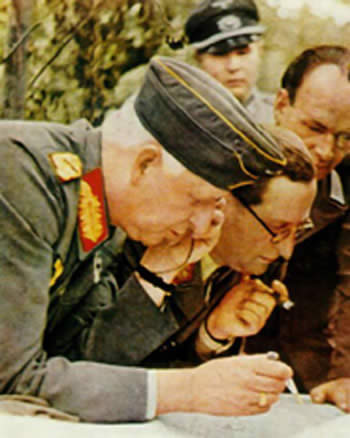 Erich von Manstein during the preparations for Operation Zitadelle, 1943 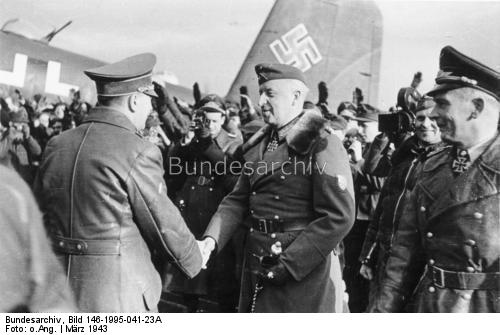 Von Manstein and Hitler at the eastern front Source: Bundesarchiv.