The "Croix du Combattant" (Warriors Cross) was instituted June 28th, 1930 as an addition to the "Carte du Combattant" which was instituted December 19th, 1926. The reason was to recognize those who had fought for France during World War One. On institution, it was decided to award the Cross to veterans of the wars of 1870-1871 and 1941-1948 and to those who had taken part in the colonial wars in between.
Janaury 29th, 1948 it was decided the Cross could also be awarded to veterans of World War Two and on July 18th, 1952, this was extended to veterans of the Indo-China and Korean wars.
During the revision of December 9th, 1974, this was again extended to veterans of military operations in North-Africa between January 1st, 1952 and July 2nd, 1962. The most recent addition of Janaury 1994 also made veterans eligible who had taken part in operations in Cambodia, Cameroun, the Gulf region, Lebanon, Madagascar, the Suezcanal, Somalia, the Central African Republic, Chad, Yugoslavia, Zaiire and Iraq.
The Croix du Combattant consists of a cross pattée with four arms, 1.41 inch in diameter, made of bronze. Laurel leaves are situated between the arms around the central disc. On the obverse, the central disc carries the logo of the republic, around in the text; "REPUBLIQUE FRANÇAISE". The reverse depicts a sword with sunrays above the text "CROIX DU COMBATTANT."
The medal could be awarded for having participated for 90 days in military conflicts or military operations in a combat unit, operating by order of the Secretary of Defence; for having been wounded or fallen ill during a military conflict or operation or for having spent 90 days in imprisonment as a prisoner of war. In any other unit or situation, the cross could be awarded after having been named on a list of honor, having participated in five armed conflicts, having been wounded in action or having been kept a prisoner of war by an enemy in disregard of the Geneva Convention. 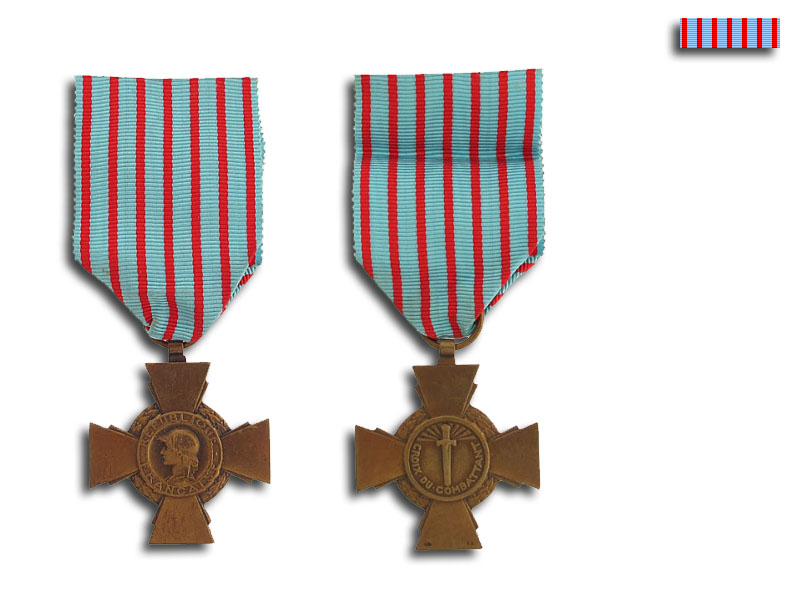