Arie Dirk Bestebreurtje was naturalized to be American citizen on March 19th, 1953.

Citational text:
"Being added ot the "Airborne Corps", which operated in the vicinity of Arnhem and Nijmegen in September 1944, having shown courage, tactfull operating, competence and perseverence by, after having parachuted, acted according to his duty."
Royal Decree No. 31, dated 30th March 1945.

Citation:
"(1) Captain HARRY BESTEBREURTJE, Captain of the Royal Netherlands Army, and a native of HOLLAND, who volunteered for service with the Special Forces, B.R.A., was commanding officer of a JEDBURG TEAM Liaison Unit between the underground partisans and Allied Forces which was attached to the 82nd Airborne Division on 10 September 1944, to aid that unit in its invasion of the Netherlands.
(2) Prior to the operations, Captain Bestebreurtje was closely allied with the Division G-2 Section and aided immeasurably with authoritative information. Thorough knowledge of the Dutch terrain was a paramount importance in the planning of the airborne operation. Capt. BESTEBREURTJE offered advice and counsel for the best results of paratroop and glider landings. Roads, bridges, rivers, and the Dutch people themselves were topics to the preparation of the operation, and he worked tirelessly to brief the planning staff with all pertinent details concerning these. His operational mission consisted of organizing the Dutch Underground to act as guides and assist the Allied Forces in their mission of occupying and holding key positions and bridges in the vicinity of NIJMEGEN, NETHERLANDS.
(3) Captain BESTEBREURTJE landed by parachute with the Commanding General at 1300 hours, 17 September 1944, 1 1/2 miles south of GROESBEEK, HOLLAND. He immediately enlisted the services of local civilians and secured the information that the Dekkerswald (woods) were lightly defended. He then advanced to the edge of the Dekkerswald and killed the first centry. After this specific area was occupied by the accompanying elements of paratroop and glider troops, he voluntarily made a night reconnaisance of the neighboring enemy stronghold city of NIJMEGEN. During the course of his venture, he met an enemy patrol, who challenged and fired upon him and his party, wounding him in three places. While in the city, he contacted members of the Dutch Underground, learned full details of the enemy's position, and was able to assure the Commanding General that the strategic NIJMEGEN BRIDGE over the MAAL RIVER would not be demolished during operations of the Division to capture the city.
(4) On Tuesday, 19 September 1944, during the battle in NIJMEGEN, Captain BESTEBREURTJE established headquarters in a large public building within the city and from there organized the entire civilian populace. He armed young men and gave them specific duties as sentries, rescue parties, and firemen. Women and elderly men were organized as medical assistants, nurses and orderlies in hospital units and to aid in the transportation, care and treatment of the injured and wounded. The police force was re-established and patrols through the non-battle zones of the city resumed. He and his partisans hunted down and confined local collaborationists and German laborers. After accomplishing the initial organization of all civilian activity so that it could best aid the liberating forces, he re-armed the former Queen's Army men in the city, He formulated and executed a plan of securing additional complete information of the enemy by allowing German speaking countrymen to be captured by the enemy under the guise of Allied labor battalion escapees. These unknown volunteers gained access to enemy headquarters and returned to Captain BESTEBREURTJE with a detailed account of German operations in the NIJMEGEN vicinity, which was speedily transmitted to the Allied Command.
(5) Captain Bestebreurtje gradually expanded his activities to embrace a vast area south of the WAAL RIVER. Wherever he could secure a reliable resistance leader, he established cells of underground resistance which operated as counter-patrols to those sent in by the Germans around a vast perimeter of operations. He likewise organized groups of trusted civilians to work with individual units of the Division for the purpose of screening all civilians in unit areas of responsibilities and to prevent the infiltration of Germans and civilian axis collaborationists.
(6) The scope and range of activities organized and directed by Captain BESTEBREURTJE during the period of his attachment to the 82nd Airborne Division has been necessarily abridged for this report. He is known far and wide by Allied military personnel and the Dutch people of the province of GELDERLAND as 'Captain Harry'. He has rendered services beyond measure to the 82nd Airborne Division and has tremendously aided the Allies in their Campaign. He actively and successfully commanded 100,000 people within two days after his arrival and is a symbol of freedom and strength to both the people of NIJMEGEN and the men of the 82nd Airborne Division who know of his outstanding contributions to the Allied cause and the continual success of the Division."
General Orders No. 67, of 13th August 1945.

Granted permission to receive and wear by Royal Decree No. 26, dated 20th July 1946.

Granted permission to receive and wear by Royal Decree No. 50, dated 21st July 1947.

Has proven himself in battle by acts of courage, conduct and loyalty, during the airborne landings of the 82nd US Airborne Division on September 17th 1944 and the following days in the facinity of Nimwegen.
As a Dutch liaison officer, working with the commander of the 82nd, he volunteerd for a reconnaissence missionin the afternoon of September 17th 1944 near Groesbeek. After capturing a guard, he returned with valuable information to his commander. After this het accompanied his commander on a patrol where they were ambushed. By his personal doing, the German machinegunner was killed and he saved the life of his commander.
Although he was wounded several times on hands and elbow, he conducted several reconnaissence missions near Nimwegen in the night of September 17th and 18th.
He was helped on his wounds in a fieldhospital and was to be evacuated on September 19th, but he refused and stayed.
On the same night of the 18th, he helped prevending an outbreak of some German prisoners of War. He managed to let the Dutch Underground Forces (Binnenlandse Strijdkrachten) from Groesbeek to take over the guarding of the prisoners. On one of the following days he went over to the British troops ans managed to get to the Waalbrug in Nimwegen with a British Armored car, under ocnstant enemy fire. During this action he killed one sniper and took another prisoner.
He helped to organise the Dutch resistance forces in Groesbeek and organised them to help the American landingforces as good as possible in occupying the landing zone.
Towards the ending of October 1944, on his own request, he took part on the liberation of 's-HERTOGENBOSCH, as a liaisons officer between the British forces and the Dutch Binnenlandse Strijdkrachten.
After he volunteered to take part in the Operation Amherst in the night of April 7th and 8th 1945, over Drenthe, near Camp Westerbork, he broke his ancle.
He layed down in a forrest for four days without any food and drink, until he succeded in reaching a farm near HOOGHALEN, where he was liberated the following day.
Royal decree No.40, dated 23rd October 1952. 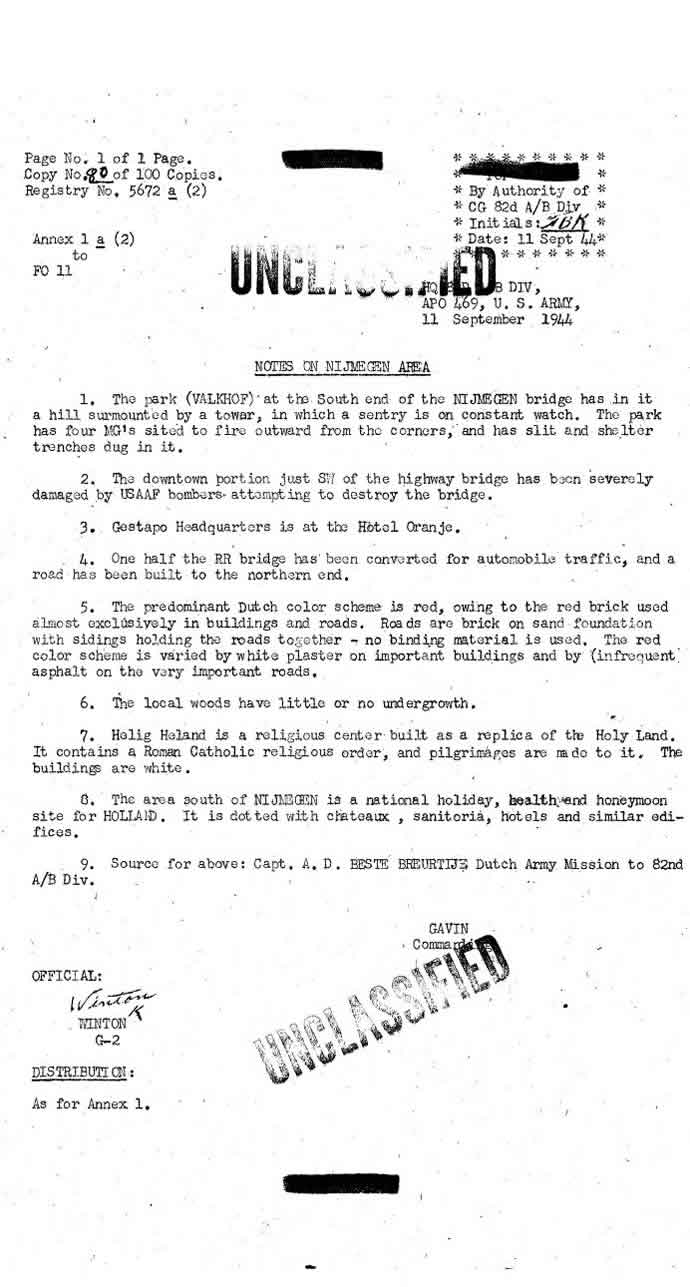