Arnulf Abele was born on November 8th 1914 in Nurnberg. He went into military service as a Fahnenjunker with Infanterie-Regiment 21. From January 1936 he attended the Kriegsschule in Potsdam and in Döberitz.
After this education, he returned to Infanterie-Regiment 21 on March 1st 1937. A month later, April 1st, he was appointed Zugführer and Kompagnie-Offizier with the I.Bataillon. His promotion to Leutnant followed on April 20th.
August 1st he was appointed Bataillons-Adjutant with Grenz-Infanterie-Bataillon 126/Infanterie-Regiment 118. October 1st he was transferred to the Generalkommando der Grenztruppen in Saarpfalz as an Ordonnanz-Offizier, where he received his promotion to Oberleutnant on August 1st 1939. This Generalkommando was reformed to XXIV.Armeekorps on September 17th 1939.

At the start of the Second World War, Abeles unit was stationed on the "Westwall", where he was appointed as Kompaniechef with Grenz-Infanterie-Regiment 127 on January 1st 1940. With this unit, Abele took part in the war in the west from May 10th 1940.
Appointed as Kompaniechef to Infanterie-Regiment 208 on February 1st 1940, he was promoted Hauptmann on April 20th 1942. His unit was put into action on the Southern part of the Eastern Front. After being appointed Kompaniechef with Gebirgs-Jäger-Regiment 218, Abele fought on the Lapplandfront. On February 17th 1943 he was appointed as commander of the I.Bataillon/Grenadier-Regiment 134, which was reformed into Reichsgrenadier-Regiment "Hoch- und Deutschmeister" on June 1st 1943.

The Battalion was transferred to the Italian Front where it was deployed near Belmonte as part of the XIV.Panzerkorps/10.Armee.
His promotion to Major followed on April 20th 1944.

Abele was taken as a prisoner of war by the Americans on September 26th 1944 south of Castell del Rio in Italy. He was released on October 15th 1946.
He went into military service again with the German Bundeswehr on December 16th 1955 with the rank of Major. He became commander of the Pi-Stab in München on January 23rd 1956, where he was promoted to Oberstleutnant on September 5th 1957.
After this he was appointed Hilfsreferent with the Heeres-Führungsstab, and subsequently he was appointed as Referent on July 1st 1964 and promoted to Oberst on December 23rd.
On March 31st 1973, Arnulf Abele retired from military service.
Abele died on July 2nd 2000 in Hopferau, Füssen.

Hauptmann Abele was a Bataillon commander in the 44. Grenadier-Division Hoch und Deutschmeister during its battles in Italy in early 1944. On the 27.01.1944 the Bataillon was ordered to close a gap in the German lines near Belmonte (specifically between the Colle Abate and Monte Castellone, in the Terelle Valley) and thereby protect the vital supply line known as the Neumann-Weg. The Bataillons promised support did not arrive, and so Abele and his men were alone in this fight.

In the fighting which ensued they defended against Allied troops from Morocco. The fighting degenerated into close combat, wherein the men of Abeles Bataillon were reduced to throwing stones when their grenades ran out. Nevertheless, with the help of mountain gun that prevented timely reinforcement of the French attack, the Bataillon was able to prevent an entire French regiment from capturing the Colle Abate. By the time they were relieved by the Pz.Gren.Rgt. 200 (90. Pz.Gren.Div.), Abeles Bataillon was down to 36 men. Yet the achievements of this unit did not go unnoticed, and Abele would receive the Knights Cross as well as a promotion. 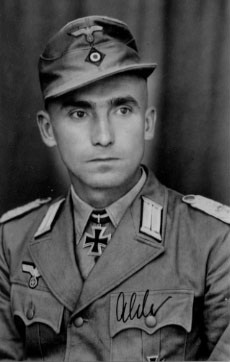