The Eastern Winter 1941/1942 Campaign Medal (Winterschlacht im Osten 1941/1942 medaille/East Front Medal) is instituted on 26-05-1942, to reward those who had taken part in the first winter campaign in Russia between 15-11-1941 and 15-04-1942. This medal is designed by SS-Unterscharfführer Ernst Kraus and could be awarded to military personal as well as to civilians who were working for the Army, as long as they qualified for one the criteria. Because of this the Eastern Winter 1941/1942 Campaign Medal is one of the most awarded German awards. By the order of the OKW (Oberkommando der Wehrmacht) the awarding of this medal ceased on 04-09-1944.

The Eastern Winter 1941/1942 Campaign Medal is made from bunt metal or out of zinc. The medal has a round shape with a diameter of 36mm. The obverse is slightly concave and the reverse convex. At the outer edge of the medal, is a 1,5mm width flat rim, with at the inside a 1mm high lip. At the top of the medal is a stick grenade horizontally placed, with on top of that a steel German Wehrmacht helm. On the top of the helm is a small eyelet placed to accommodate the ring for the ribbon. The height measures from the top of the eyelet to the bottom of the medal 44,5mm. The image on the obverse shows a typical Wehrmacht eagle with folded wings, that in clutching a swastika in its claws. Behind the swastika is a branch of laurel leaves placed. This branch is placed diagonally and only half visible. The image on the reverse exists of the text: WINTERSCHLACHT IM OSTEN 1941/1942 with underneath another branch of laurel leaves, which is crossed by a broad sword. The medal has a gunmetal colour with the outer rim and helm being bright silver. The medal is suspended by a broad red ribbon, with in the centre a black stripe, which is flanked by two smaller white ones. Its foundation decree stated that the red represented the bloodshed, the white stood for snow and the black for those who had fallen. Some know manufacturers are: (3) Wilhelm Deumer from Lüdenscheid, (4) Steinahuser & Lück from Lüdenscheid, (5) Hermann Wernstein from Jena-Löbstadt, (6) Fritz Zimmermann from Stuttgart, (7) Paul Meybauer from Berlin, (10) Foerster & Barth from Pforzheim, (11) Grossmann & Co from Vienna, (13) Gustav Brehmer from Markneukirchen, (15) Friedrich Orth from Vienna, (19) E. Ferdinand Wiedmann from Frankfurt, (20) C.F. Zimmermann from Pforzheim, (25) Arbeitsgemeinschaft der Hanauer Silberschmiede, (30) Hauptmünzamt from Vienna, (39) Rudolf Berge from Gablonz, (55) J.E. Hammer & Söhne from Geringswalde, (60) Katz & Deyhle from Pforzheim, (65) Klein & Quenzer from Idar-Oberstein, (73) Franz Möhnert from Gablonz, (76) Ernst Müller from Pforzheim, (80) G.H. Osang from Dresden, (88) Werner Redo from Saarlautern, (92) Josef Rückert & Sohn from Gablonz,
(93) Richard Simm & Söhne from Gablonz, (100) Rudolf Wächtler & Lange from Mittweida, (107) Carl Wild from Hamburg, (110) Otto Zappe from Gablonz,
(127) Moritz Hausch from Pforzheim, (L/55) Rudolf Wächtler & Lange from Mittweida and (L/57) B. Boerger & Co from Berlin. The most of these medal are not marked, those who are have the maker mark stamped in the ring of the ribbon.

The Eastern Winter 1941/1942 Campaign Medal was awarded in a blue, red or buff coloured paper bag, with the name of the award printed on it. It was awarded with a standard award document and conferment of the award was entered in the Soldbuch.

On official occasions or military parades the medal was worn suspended from its ribbon or as part of a group. During active duty only the ribbon was worn through the second buttonhole or as part of a ribbon bar. When it was worn through the buttonhole, it was put behind the ribbon of the Iron Cross 2 (Eisernes Kreuz 2. Klasse) or The War Merit Cross second class (Kriegsverdienstkreuz 2. Klasse) but among combat troops it is often seen after the last because of the higher prestige of the Eastern Winter 1941/1942 Campaign Medal.

The criteria for receiving this award were:

That the recipient had been engaged in combat for at least 2 weeks.
That the recipient spent at least 60 days in the operation area.
That the recipient inflicted a wound during combat.
When the recipient suffered serious frostbite for which the Wounded Badge 1939 in Black (Verwundetenabzeichen 1939 in Schwarz) was awarded. Because of this the Eastern Winter 1941/1942 Campaign Medal was also know as the Frozen Meat Order. (Gefreierfleischorden)

For Luftwaffe personal was the criteria, that they had flown at least 30 days above enemy territory. 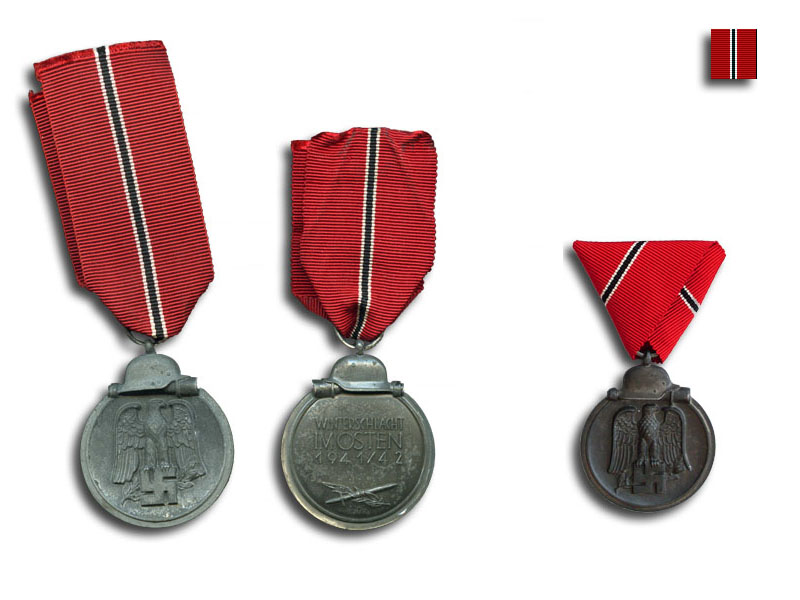