On the 26.12.1944 the enemy launched an attack in the sector adjacent to the left of Regiment 44. With the help of both a strong artillery fire preparation and ground attack aircraft support, the assault succeeded in achieving a 2 km deep penetration. This created a frontline gap that provided the enemy with an opportunity to reach the vital road junction at Jānukrogs, located in the gap between two swamps. Such a move would split the Divisions sector and block its most important supply road. Simultaneously, this frontline gap could have permitted the enemy to launch a flanking thrust to the east and thereby complete their intended encirclement of the Divisions main body.

Waffen-Hauptscharführer Ansons, Zugführer in the 3./Regiment 44, recognized the gravity of the situation. And in this moment he distinguished himself through outstanding bravery.

He threw himself against the deeply broken-in enemy at the head of a few men, and after bitter counterthrusts and hard close combat he was able to eject the foe. He sealed off the penetration and managed to hold this new frontline in a heroic display of resistance against the repeated onslaughts of a superior opponent.

This outstanding deed of bravery deserves appropriate recognition. It is therefore recommended that Waffen-Hauptscharführer Ansons be awarded the Knights Cross to the Iron Cross. 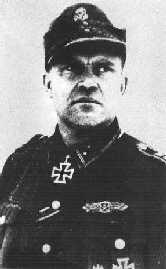