Karl Hermann Arndt was born on 10th March 1892 in Groß-Kauen, Kreis Glogau, Germany. He did his military training at the Front-schule in Wohlau and Potsdam between 1908 and 1911. He left the school with the rank of Gefreiter.

After his military training he was placed with the 46.Infanterie-Regiment. With this unit he took part in the First World War. He was promoted to Unteroffizier on 27th January 1912, to Sergeant on 15th April 1915 and Vizefeldwebel on 15th June 1915.
On 20th December 1917 he was promoted to Offiziers-Stellvertreter.
Karl Arndt was taken prisoner by British troops on 18th September 1918 and was released again on 20th March 1919.

After the First World War he once again went into military service with the rank of Leutnant. Between 15th August and 1st December 1919 he was Kompanie-Offizier with the V.Volkswehr-Bataillon. Until 15th February 1920 he was in command of this same battalion.
Between 16th February 1920 and 4th April 1927 he served in the 105.Reichswehr-Schützen-Regiment, the 9.Reichswehr-Schützen-Regiment, the 8.Infanterie-Regiment, the 3.Pionier-Bataillon and the 8.Infanterie-Regiment. He was promoted to Oberleutnant on 1st December 1923.
From 4th April 1927 until 2nd August of the same year, Arndt did a training course on the V.Offiziers-Waffen-Lehrgang, which was followed by training at the Kriegs-Schul-Kurs A with the rank of Hauptmann.
From 1st February 1929, he served as Kompaniechef with the 8.Infanterie-Regiment. On 18th November 1930 he once again attended a training course. This time at the Minenlager-Kurs A in Döberitz until 14th March 1931. After this training he became Kompaniechef with the Infanterie-Regiment "Frankfurt/Oder".
On 1st April 1935, he resumed command over the I.Bataillon/68.Infanterie-Regiment and was introduced into the Regiment's staff from 31st January 1936 with the rank of Major.
He took over command of the 16.Ersatz-Bataillon on 1st August, and between 6th October 1936 and 18th January 1939 he was in command of the Ersatz-Bataillon of the 67.Infanterie-Regiment. On December 31st 1937 he was promoted to Oberstleutnant.
He took part in the Generalstabs-Lehrgang with the 23.Infanterie-Division in November and December 1939 and became commander of II.Bataillon/68.Infanterie-Regiment from 18th January 1940 until 15th February. A true step forward in his career was Arndt becoming commander of the 511.Infanterie-Regiment on 15th February 1940, the regiment with which he earned his Ritterkreuz zum Eisernes Kreuzes on 23rd January 1942. On 20th November 1942 he was promoted to Oberst.
Right from 10th January 1943 he was in command of the depot of 293.Infanterie-Division, the Division he went on to command from 1st April with the rank of Generalmajor. He was appointed commander of 359.Infanterie-Division on 20th November 1943. On 8th November 1943 Arndt was promoted to Generalleutnant.
He was appointed commander of LIX.Armeekorps on 17th January 1945, the Armeekorps with which he earned his Eichenlaub to his Ritterkreuz on 31st January 1945. His last transfer followed on 25th April 1945, when he was to become commander of the XXXIX.Panzerkorps.
Arndt was taken prisoner by the Americans on 8th May 1945 and was interned in the former concentration camp Dachau. He was released on 5th July 1947.

Karl Arndt died in Langenholthausen near Neuenrade in Germany on 30th December 1981.

The Iron Cross 2nd Class itself, Arndt had received on October 3rd 1914.

During the pocket battle east of Kiev, two enemy divisions tried to break through the Divisions lines by utilizing a bridgehead in the area. Additional strong enemy forces launched a surprise attack further north against Arndts advancing Regiment. Oberst Arndt immediately decided to order his Regiment to launch a counterattack, and he went on to direct the attack from the roof of a house despite his close proximity to the enemy and the strong hostile artillery fire. This house crumbled underneath him due to the effects of the artillery fire, however the enemy was ultimately defeated. The bold and energetic attack of the Regiment meant that the frontline gap between the friendly and neighbouring division was closed by the evening of this day. This success doomed all the enemys subsequent breakthrough attempts.

The counterattack mentioned in the text was launched into the Soviet flank.

"In the area of Krakow has the Brandenburg 359th Infantry Division under the command of Lieutenant General Arndt shown outstanding steadfastness and exemplary attack momentum and thereby thwarted the breakthrough of far superior enemy forces south across the Vistula and thus enabled the construction of a closed defensive front."

Awarded for distinguishing himself around Cracow with his Regiment during the combat in early 1945. Here he prevented a breakthrough by far superior Soviet forces towards the south and over the Vistula river. By doing so he and his men enabled the construction of a solid defensive line. 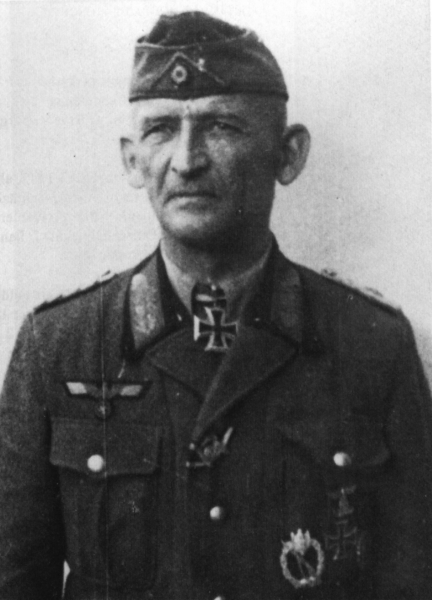 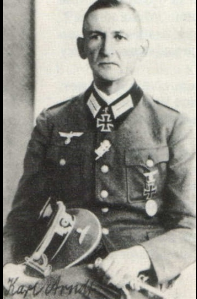