The War Merit Cross second class bronze with swords (Kriegsverdienstkreuz 2. klasse mit Schwertern) also know as the KVK 2 was instituted on 18-10-1939 by Hitler. This award could be awarded to military personal as well as to civilians (m/f) for bravery not directly connected with frontline actions. For example: maintenance of frontline vehicles and equipment, outstanding performance by the civil defence and security tasks. (For more information see also the War Merit cross second class without swords.)

This award is shaped like a large Maltese cross and measures 1.9" across. The cross is struck in different metals, but mostly in zinc. The crosses made of zinc were subsequently bronze washed. Some specimens were struck in bronze, but these are very rare. The Maltese cross has a raised border, with a pebbled surface within these borders. In the middle of the cross lies a wreath of oak leaves with a knotted ribbon on top and bottom. A swastika is placed in the center of the wreath. The reverse of the badge has a smooth surface and shows the same wreath, except for the inscription 1939 instead of the swastika. The wreath measures 0.6" in width. In this version of the War Merit Cross two swords are placed diagonally through the cross. These swords are broad double-edged, as in the Roman military design.
On top of the upper arm of the cross, an eyelet is mounted with a ring attached to it.
The badge is suspended from a ribbon, passing through this ring. The ribbon is 1.18" wide and is the reverse of the ribbon used for the Iron Cross 1939, e.g. a central black vertical stripe .55" in width , flanked by a thin white and a thin red stripe, each .15" in width.
The mint mark was usually stamped on the ring; some well known manufacturers were: Steinhauer & Lück from Lüdenscheid,(4) L. Chr. Lauer LL. from Nürnberg, (14) Karl Wurster KG from Markneukirchen, (18) E. Fred Weidmann from Frankfürt am Main, (19) Willy Annetsberger from München, (34) Julius Bauer& Söhne from Zella-Mehlis, (43) Jakob Bengel from Idar-Oberstein, (44) Frans Jungwirth from Vienna, (45) Robert Hauschild from Pforzheim, (56) Karl Hensler from Pforzheim, (57) Rudolf Tham from Gablonz ad N. (101) and Hermann Aurich from Dresden. (113)


On official occasions or military parades the cross was worn suspended from its ribbon or as part of a group. During active duty only the ribbon was worn through the second buttonhole or as part of a ribbon bar. When it was worn through the buttonhole, it was put behind the ribbon of the Iron Cross 2 and before the Eastern Winter Campaign Medal. (Ostmedaille) but among combat troops it is often seen after the latter because of the higher prestige of the Eastern Winter Campaign Medal. 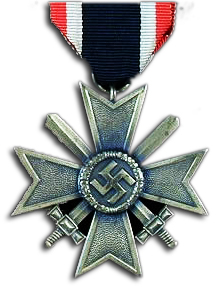